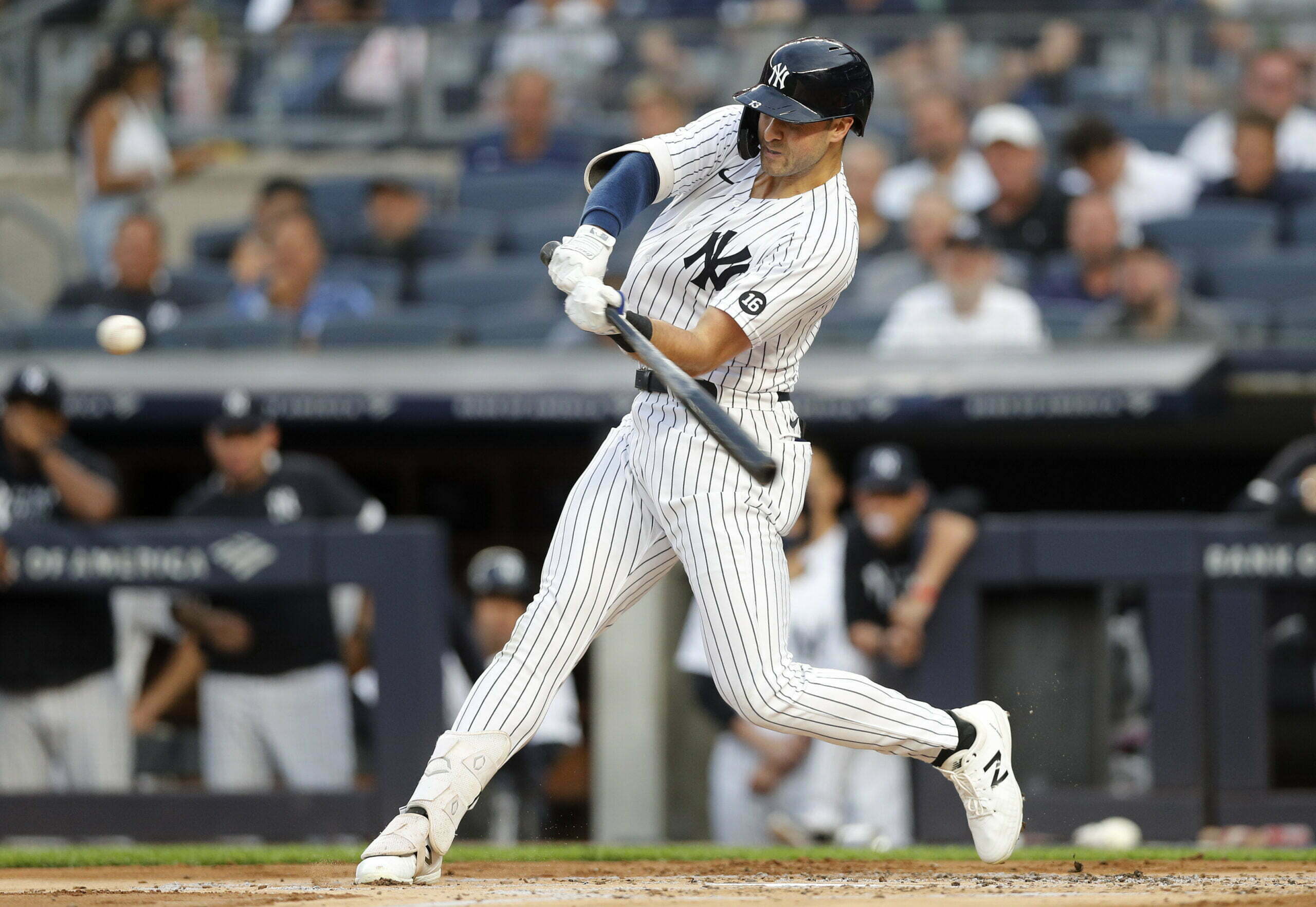 Yankees Aaron Judge DJ LeMahieu home uniform low five. Whatever you think of the Yankees’ long-term chances this season — deep postseason run or an early October vacation (maybe an excellent fall foliage tour?) — you have to admire how the club has persevered.

Their season once looked lost, even with the big stars and big payroll. But, despite myriad challenges, from a roster with flaws to injuries to battles with COVID-19, the Yanks sit in a decent spot right now with just under two months of the regular season remaining.

Heading into a three-game series in Kansas City that begins Monday night, the Yankees are in third place in the AL East, 6.5 games behind the Tampa Bay Rays with the Boston Red Sox wedged in between, and 2.5 games back in the Wild Card race. They are 19-9 since July 6, the second-best mark in the Majors over that span.

They don’t currently hold a postseason spot, but things sure seem different around the Yankees than they were earlier this year, don’t they? They finished a 5-2 homestand Sunday with a 2-0 loss to the Mariners, but players talked over the weekend about a renewed zeal around the club.

“It’s a confident group right now,” infielder DJ LeMahieu said after a comeback win on Saturday. “It’s a confidence that, honestly, you know, it’s been a little while since we had that kind of confidence. With that confidence, everybody’s having a little bit more fun and locking in.” There are still looming problems, though. This wouldn’t be the 2021 Yankees season without them.

On Sunday, Anthony Rizzo, the one-man trade-deadline jolt, became the 12th Yankee to be sidelined by COVID-19. Gleyber Torres hurt his left thumb on a slide Sunday and will undergo an MRI to determine any damage. Gerrit Cole, Jordan Montgomery, and Gary Sánchez are already on the COVID-19 list, and Aroldis Chapman, Gio Urshela, and Domingo Germán are injured. Urshela could return this week.

Usually, the offense is a critical component for the Yanks, averaging just 4.16 runs per game (the MLB average is 4.49). Many offensive cogs, such as LeMahieu, are underperforming, though the addition of lefty bats such as Rizzo and Joey Gallo makes them more balanced.

Still, the Yankees have marched on and, recently, have been thriving. There were other revealing quotes from the weekend that maybe show how well they are faring despite everything. On Saturday, Aaron Boone cracked a joke about a position player (Rizzo) perhaps pitching in a game.

That’s a nightmare scenario for a manager since it usually means a blowout loss. And after Andrew Heaney, another deadline acquisition had not started well that afternoon, that seemed like the depths the Yanks were headed. But Heaney got himself right, and the Yanks rallied to win, so let the ha-ha’s rip, Skip.And Kyle Higashioka delivered a terrific line about new reliever Stephen Ridings, too, saying, “What kind of substitute teacher throws 100?” It was an excellent summation of Ridings, the former sub, who has emerged into an unexpected bullpen weapon.

He’s not the only recent MLB discovery, either. Luis Gil was a well-regarded prospect, and he’s seized his MLB chance, throwing 11 scoreless innings over his first two starts thanks to a nifty fastball-slider-changeup troika.

Who knows what Gil’s role could be once injured starters, including Luis Severino, possibly return, but it’s a friendly arm to have. According to Boone, Severino threw four perfect innings in a rehab start Sunday and is slated for at least one more minor-league tuneup.

Overall, their starters have been soaring lately. In their last 29 starts, Yankee starting pitchers have a 2.62 ERA. In 23 of those games, they’ve allowed two earned runs or fewer. While there have been some rough pitching patches, that part of the Yankees’ game has not been a problem for much of the season — the Yanks are eighth in overall ERA, third in batting average against, and fourth in WHIP.

A resurgent Jameson Taillon opens the series against the Royals, and he is 6-0 with a 2.35 ERA over his last nine starts. He looks like the pitcher the Yanks hoped he’d become when they traded for him over the winter.

Kansas City might be a good place for the Yankees to continue their nice run. The Royals (48-62) are 26th in team ERA (4.91) and average even fewer runs (4.10) than the Yankees. New York is 26-11 against Kansas City since 2015 and has won 10 of the last 11 series against the Royals. A string with the Chicago White Sox follows, and the Yanks also play contenders such as Boston, Atlanta, and Oakland this month. Better keep persevering.