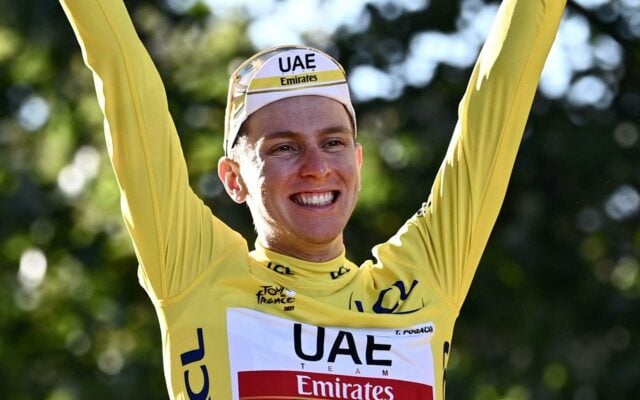 LIDO DI FERMO, Italy — Breakaway rider Mads Würtz Schmidt won a five-man sprint to take the sixth and penultimate stage of the Tirreno-Adriatico and the overall lead of Tour de France champion Tadej Pogačar remained unchanged. It was the first World Tour victory for the 26-year-old Würtz Schmidt, a Dane who won the world championship time trial at both the junior and under-23 levels.

Brent Van Moer crossed second and Simone Velasco was third. Würtz Schmidt was part of a small group of riders who broke away from the main pack 23 kilometers (14 miles) into the 169-kilometer (105-mile) leg from Castelraimondo to Lido di Fermo on the Adriatic coast.

The stage, which was mostly flat with some minor hills, concluded with five laps of a circuit and there was ample ground for the main pack to catch the breakaway but the sprinters’ teams didn’t get organized quick enough. “To finally win after five years on the world tour, it’s a big relief,” Würtz Schmidt said. “I took my chance today and we worked well in the breakaway.” Würtz Schmidt, who rides for the Israel Start-Up Nation team, finished in 3 hours, 42 minutes. The main pack, including all of the overall leaders, crossed more than a minute behind.

In the overall standings, Pogačar leads Wout van Aert by 1:15. Mikel Landa is third, 3:00 behind. British rider Simon Carr crashed into a traffic island midway through the stage but got back on his bike and kept going. The race ends on Tuesday with an entirely flat 10.1-kilometer (6.3-mile) individual time trial in San Benedetto del Tronto.

“Tomorrow,” Pogačar said, “the important thing is to remain in the leader’s jersey.” The Tirreno is followed by the Milan-San Remo classic on Saturday, although Pogačar said he’s not planning to enter the single-day classic along the Italian Riviera. Würtz Schmidt wins Stage 6; Pogačar keeps Tirreno lead originally appeared on NBCSports.com