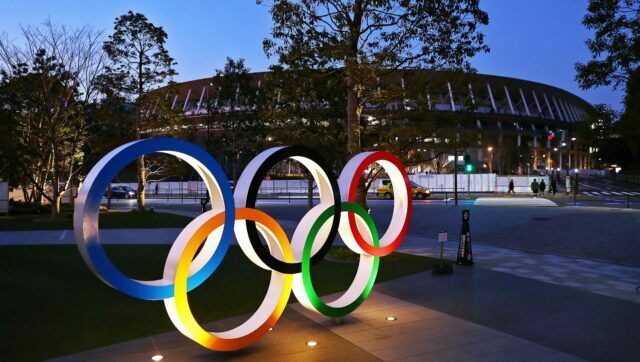 TOKYO – No one knows what’s next for Simone Biles. But an Olympic cyclist might serve as an example of what’s possible for the gymnast. In January, Tom Dumoulin of the Netherlands walked away from competitive cycling because of mental health struggles. On Wednesday, he won the Olympic silver medal in the men’s individual time trial at the Tokyo Games.

Only after a four-month layoff did the Dutchman begin training for the Olympics. “I came from very far, the last couple of months, so this is all I got today, and it’s beautiful,’’ Dumoulin said after the race. “I was over-trained in the winter, and also mentally, I was quite down. I took a break, and then I found out that I still love my bike.

Tom Dumoulin, left, stands on the podium in the Men’s Individual Time Trial.“I still love to suffer on the bike. I still love to be aiming for the big goals in professional cycling and decided to come back, especially for this event today.” Perhaps that is something Biles, 24, will experience after her shocking withdrawal from the Olympics.

Like Dumoulin, Biles referred to mental health issues as a reason for her shocking withdrawal from competition at the Olympics. On Tuesday, she pulled out of the team competition after the vault, the Americans’ first event, and decided against competing in the all-around final Thursday night at the Tokyo Games.

Long before the shocking development for Biles, Dumoulin said he knew he wasn’t alone. “Of course I am not alone,” Dumoulin said in June, according to Cycling News. “There are many top athletes and certainly also non-top athletes who sometimes struggle with themselves, but I don’t want to present myself as a role model. “I have no advice for others. Each person can figure that out for himself. …I certainly found the love of cycling again.

LIVE UPDATES: All the action from Day 5 of the Olympics

TEXT WITH US AT TOKYO OLYMPICS: Subscribe to texts, where we’ll be your official guide to the Games

“I was in a deep place before. Besides the mental difficulties, I was overtrained, so physically, I was not healthy either. As soon as I took some rest, I felt better. When I got back on the bike, I felt that the rider Dumoulin was not finished yet – I still have that feeling now.”

The feeling must have been as strong as ever on Tuesday, with the silver medal draped around his neck. Although he was not inclined to offer advice, his path could be a blueprint for Biles. In short, Dumoulin needed time away.

“It’s been a tough road back,’’ he said. “I had a clear goal in mind to take a medal here. And I succeeded. It’s not gold, but it’s silver with the golden touch.” This article originally appeared on USA TODAY: Tokyo Olympic cyclist Tom Dumoulin may be an example for Simone Biles.