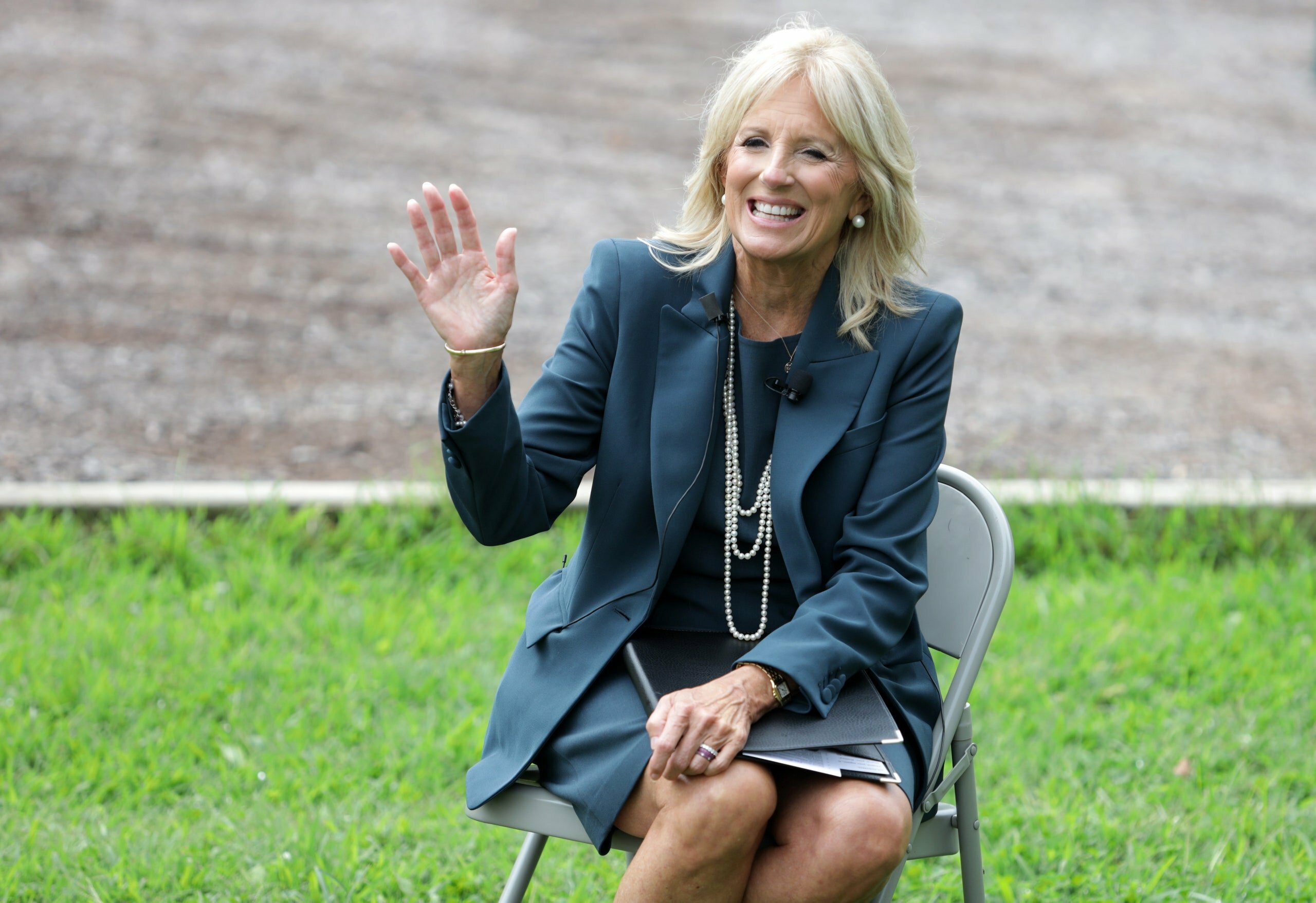 Less than a year before marking an unprecedented 70 years on the throne, Queen Elizabeth II has met her 13th occupant of the White House, President Joe Biden, and first lady Jill Biden. The three joined together at Windsor Castle on Sunday, following the G-7 summit that Joe Biden attended in Cornwall, England.

The president’s helicopter landed on the castle lawn shortly before 5 p.m. local time, and the Bidens rode up in a black Land Rover – the late Prince Philip’s favorite car – to join the queen on an outdoor dais for photos. Her Majesty wore a cheery pink floral ensemble with a matching hat and white gloves. The first lady wore a powder-blue skirt suit (she was seen tucking her face mask into her pocket), and the president donned his signature aviator sunglasses with a navy suit and light blue tie.

The three stood together for “The Star-Spangled Banner” (“God Save the Queen,” the U.K.’s national anthem, played minutes before the Bidens’ arrival), and the queen and first lady stayed on the dais as the president inspected the red-uniformed and bearskin-capped Guard of Honor assembled on the castle grounds. During former President Donald Trump’s 2018 visit, Trump broke royal protocol by walking ahead of Queen Elizabeth II during the inspection. 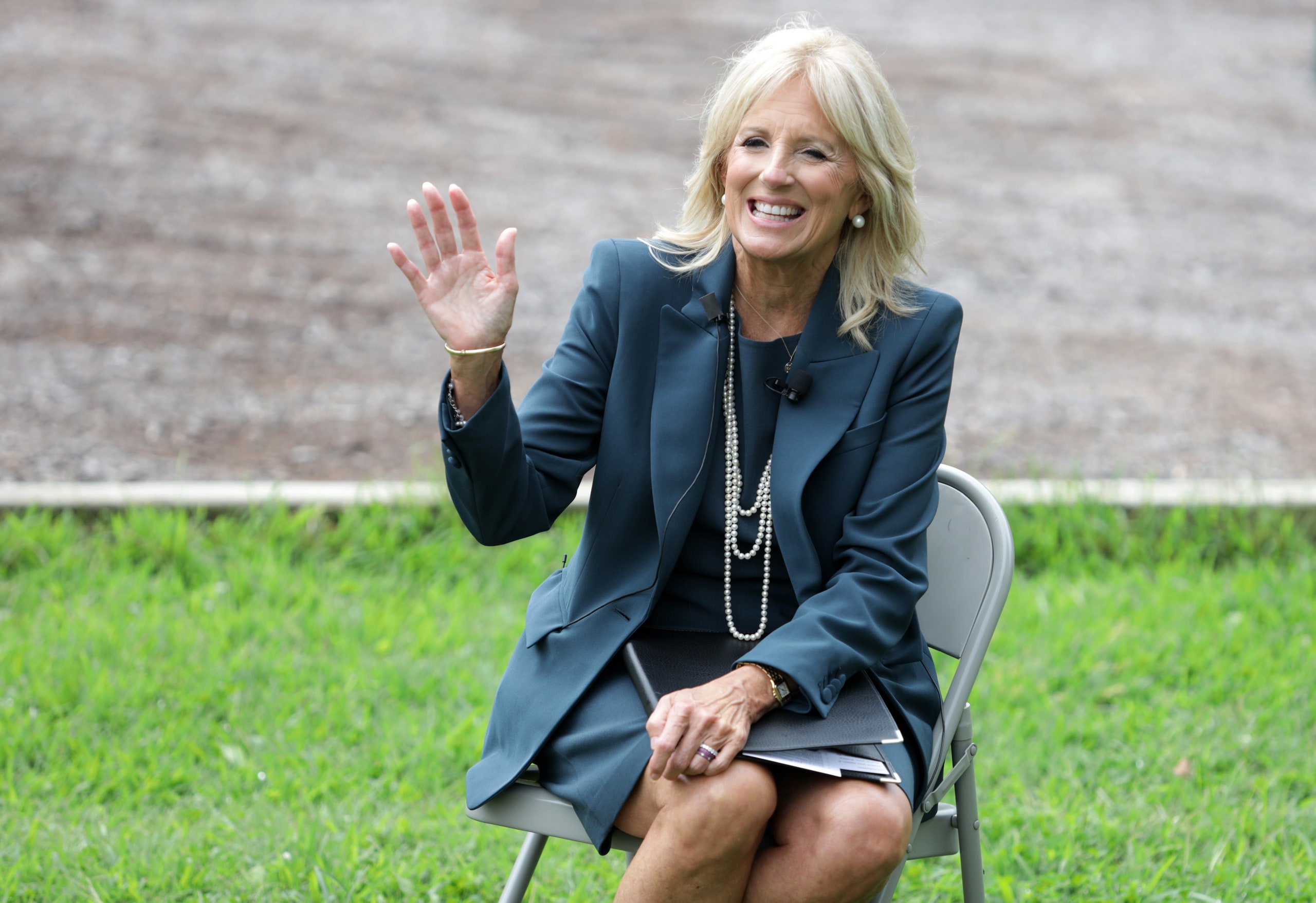 The Bidens then headed inside to take tea with the 95-year-old monarch. As they left the dais, Biden offered an elbow to the queen. She did not take his arm and stepped down while holding the handrail. The Bidens emerged from the castle just shy of spending an entire hour with the queen and boarded the helicopter for the return trip to London.

Afterward, the president told pool reporters that the queen was “very gracious” and that he invited her to the White House. He said the monarch reminded him of his late mother.  Last week, the president’s press secretary Jen Psaki told reporters, “Who among us wouldn’t want to meet the queen? … They issued, of course, an elegant invitation, which he certainly accepted. He’s looking forward to seeing her with Dr. Biden as well.”

This marks the Bidens’ first overseas trip since taking office and his first meeting with the queen as president. But the White House says he participated in an audience with the queen in November 1982, when he traveled to the U.K. for a meeting of the British-American Parliamentary Group during his second term as a U.S. senator from Delaware.

Previously: Duchess Kate sends ‘the very best’ to baby Lilibet during a visit to U.K. school with Jill Biden.

During her reign, the queen has been treated to a record five State Dinners at the White House – more than any other monarch or head of state, according to the White House Historical Association. The meeting with the Bidens is not a state visit; it’s a more informal courtesy call of the sort Donald Trump, and former first lady Melania Trump carried out when they dropped by for tea with Her Majesty. (In 2019, she hosted them for a state visit, including the usual lavish state banquet at Buckingham Palace.)

As is usual at these summits, the first lady took part in the program organized by Johnson for G-7 spouses on Friday and Saturday. On Friday, she appeared with Kate, Duchess of Cambridge, at a local school in Cornwall to highlight their joint interest in early childhood education.

The Bidens and other G-7 leaders attended a reception hosted by Prince Charles’s queen and his wife, Camilla, Duchess of Cornwall, and Prince William and Kate. The get-together, confirmed late Thursday by the White House, was an indication that the British crown and government view the first G-7 summit of the Biden administration as necessary enough to deploy the top royals to mingle with the visitors.

After they meet with the queen Sunday, the first lady will meet with U.K. veterans who participated in Walk of America, a 2018 expedition led by Walking With The Wounded to share stories of injured service members, and for which Biden served as a patron.