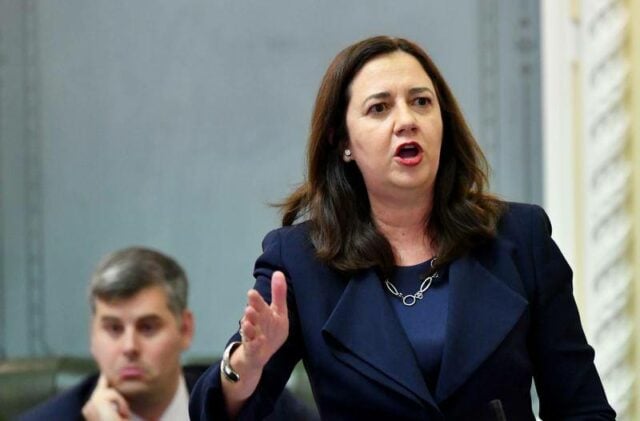 Queensland Premier Annastacia Palaszczuk was publicly admonished on Wednesday night in an awkward press conference broadcast to the entire world. Ms Palaszczuk had earlier vowed not to attend the Tokyo Opening Ceremony on Friday night, saying she would watch the events from her hotel room, but was all but ordered to attend by Olympic powerbroker John Coates.

After the winning vote on Wednesday, Mr. Coates, the Australian Olympic Committee president, scolded the Premier at an internationally streamed press conference. “You are going to the opening ceremony. There will be an opening and a closing ceremony in 2032, and all of you, everyone there, has got to understand the traditional parts of that, what’s involved in an opening ceremony,” Mr. Coates said.

“None of you are staying home and going to be sitting in your room. “You’ve never been to an opening ceremony. You don’t know the protocols and I think it’s a very important lesson for everyone here – opening ceremonies cost in the order of $75 to $100 million. “My solid recommendation is the Premier, and the Lord Mayor and the minister be there and understand it.” On Thursday, Ms. Palaszczuk said “she doesn’t want to offend anyone” and would attend the ceremony with Brisbane Lord Mayor Adrian Schrinner and Federal Sports Minister Richard Colbeck if Mr. Coates believed she should. “John Coates was laying down the law last night,” she told ABC radio. “We are now a part of the IOC family, and I will do what John Coates says.”

She told ABC Breakfast she would leave her attendance in the hands of Mr. Coates and IOC President Thomas Bach. “Now there is an expectation (that we attend),” she said. Earlier this month, she had been adamant that she would be “essentially flying in and out” of Tokyo. “I am not attending any events whatsoever,” she said. The Premier’s office said Ms. Palaszczuk was now due to return to Australia early next week.

Ms. Palaszczuk’s trip to Tokyo has been marred by controversy, with more than 130,000 people signing a petition calling her a hypocrite for taking up a spot in hotel quarantine upon her return to Queensland after slashing the spaces available to returning Australians.

She again defended her trip on Thursday morning, saying being in the same room as the IOC members and talking to them directly was “extremely powerful”. “That’s why the Lord Mayor (Adrian Schrinner) and I had to be there,” she said. “To keep the faith that we are absolutely committed. “After the vote, so many IOC members were coming up and saying, well done, that was one of the best presentations we’ve ever seen.”