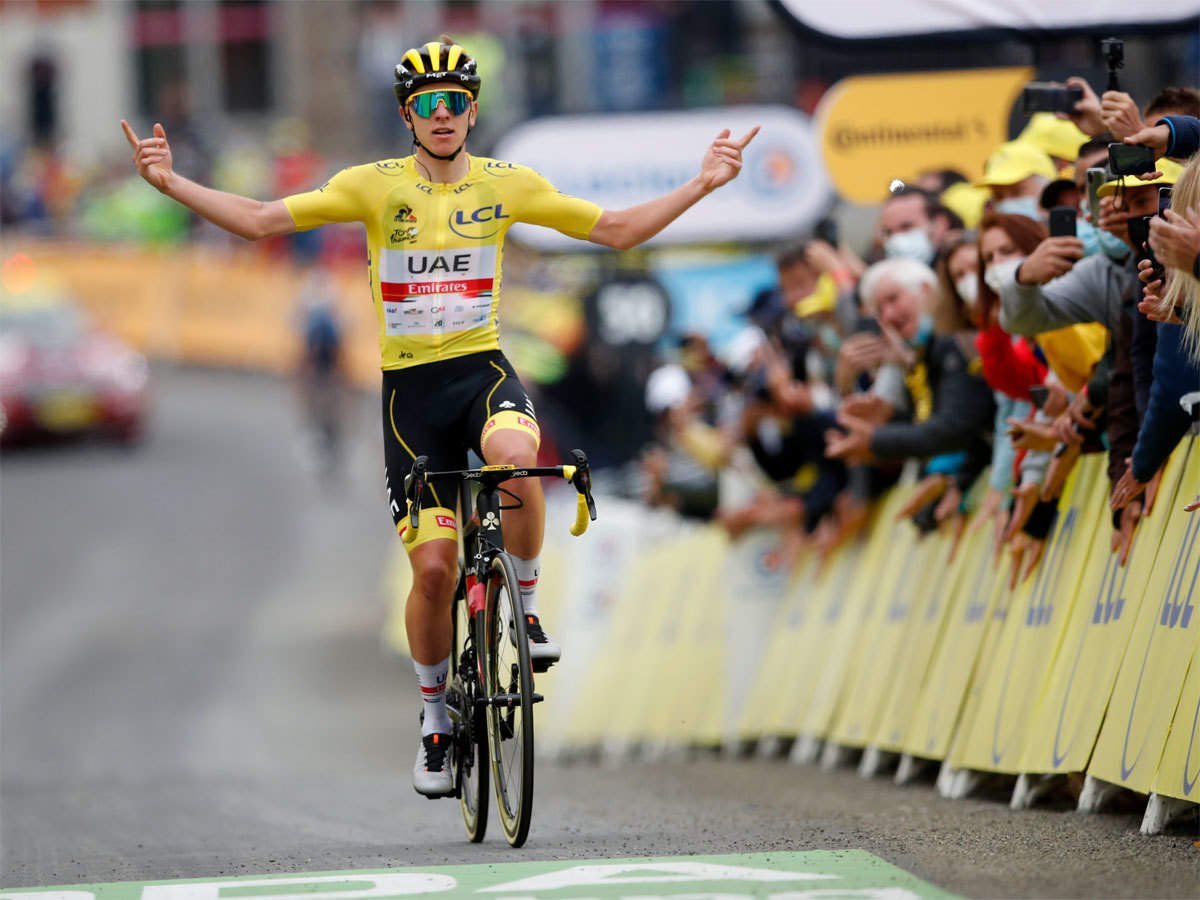 Tadej Pogacar took the yellow jersey to Paris to win his second straight Tour de France on Sunday after a grueling three-week odyssey that at times he made look like a recreational ride. Pogacar’s repeat success at cycling’s most significant event was a tale of total dominance, prompting one question: At age 22, how many more Tours can the Slovenian win?

Pogacar won his first title last September when he became the Tour’s youngest champion in 116 years. He is now the youngest double winner of the race. In sharp contrast to last year — when he had to wait until the penultimate stage to seize the overall lead — Pogacar has been untouchable in this race as a rookie.

His team was better equipped and better prepared, and Pogacar assumed the favorite’s mantle with the ease of a seasoned veteran. His supremacy was such that he also claimed the King of the Mountains and best young rider jerseys in addition to his overall win.

The UAE Team Emirates leader successfully defended his massive lead of 5 minutes, 20 seconds over second-place Jonas Vingegaard in the mostly ceremonial final stage to the Champs-Elysees on Sunday. Richard Carapaz finished third overall, 7:03 off the pace. Vingegaard and Carapaz were the only riders to finish within 10 minutes of the two-time champion.

“I did my best, maximum like I always do, and that was enough,” Pogacar said. Wout van Aert won the 21st stage in a mass sprint. That prevented Mark Cavendish from beating Belgian excellent Eddy Merckx’s record of 34 stage wins which the British sprinter equaled earlier in the race.

The mostly flat 108-kilometer (67-mile) leg began in Chatou just outside Paris and concluded with eight laps up and down the famed avenue. Pogacar and his teammates rode together at the front of the pack as they reached the Champs-Elysees, and the Slovenia champion raised his fist in the air in celebration.

Pogacar’s gesture was a signal for those fighting for a prestigious stage win as the first accelerations took place. But the attackers’ efforts did not pay off and the stage ended in a mass sprint. Cavendish, who consoled himself with the best sprinter’s green jersey, banged his handlebar in frustration after van Aert edged Jasper Philipsen to the line. Cavendish was third.

Van Aert, a 26-year-old versatile Belgian with exceptional skills on all terrains, became the first competitor since 1979 to win a sprint, a mountain stage, and an individual time trial in the same edition of the Tour.

As for Pogacar, the only crack in his armor came in the Mont Ventoux stage in the second week, when he was briefly dropped by Vingegaard during the second ascent of the iconic mountain. But Pogacar showed calm and composure that day to catch his rival and remained unscathed. Apart from that scare, Pogacar’s ride was flawless and merciless.

Following his stunning display in the first trial, he was in a class of his own in the Alps and seized the race lead with a vintage long-distance attack in atrocious weather. He then wrapped up the demolition work in the Pyrenees with two prestigious stage wins to become only the fourth rider in Tour history to win consecutive summit finishes at cycling’s biggest race.

Even Merckx, the five-time Tour champion widely regarded as the greatest-ever winner, was impressed. “I see in him the new ‘Cannibal,’” said Merckx, who earned that nickname for his ruthless will to win. “He can certainly win the Tour de France more than five times.”

Pogacar has won praise for his attacking mentality and his ambition to deliver in all types of races. He linked up his first Tour triumph with victories at the UAE Tour, Tirenno-Adriatico, and the prestigious one-day classic Liege-Bastogne-Liege.

But as always at the Tour de France, when a competitor outclasses the field, Pogacar’s dominant ride also raised suspicions. This week, he was asked about UAE Team Emirates general manager Mauro Gianetti’s ties with riders who received doping suspensions in the past.

Gianetti was previously the manager of Saunier Duval, the team of Riccardo Ricco, an Italian rider who tested positive for the blood-boosting drug CERA in 2008. He was also manager of the Geox-TMX outfit of Juan Jose Cobo, who was stripped of his 2011 Spanish Vuelta title for doping violations.

“I can only speak for myself,” Pogacar said. “When I met Mauro, he was really great to me, and he is a super good person. I believe what is in the past is in the past, and this new cycling is a way more beautiful sport than before.”

Pogacar has insisted that the repeated doping controls he underwent should be enough to convince doubters that he is riding clean. “I think we have many controls to prove them wrong,” Pogacar said during the race’s first rest day.

Pogacar’s dominance was helped by the misfortunes of two of his biggest rivals, last year’s runner-up Primoz Roglic and former Tour champion Geraint Thomas, who tumbled during the crash-marred first week of racing never recovered. More importantly, 2019 champion Egan Bernal skipped the Tour this year after his Giro victory in May.

The Colombian climber is just 24, has excellent time trial abilities, and should be Pogacar’s main rival in the years to come. Meanwhile, Pogacar will fly to the Tokyo Olympics, where he will be among the favorites for the gold medal in the road race. “Anyone who can follow Tadej will be close to victory,” said van Aert. More Tour de France coverage: https://apnews.com/tag/TourdeFrance and https://twitter.com/AP_Sports