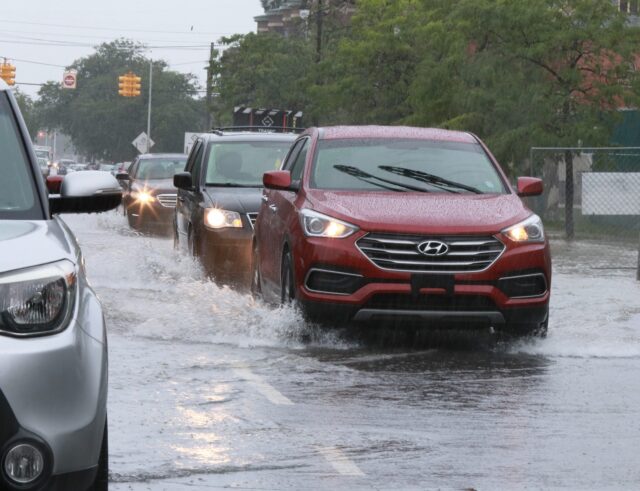 The National Weather says tornadoes struck near Detroit and Flint on Saturday evening. TThe weather service said Sunday that the two EF-1 tornadoes touched down in Genesee County’s Clayton Township around 6:30 p.m. In Oakland County, around 7:45 p.m., Damage from both storms was consistent with winds of 100 mph touching down in Oakland County around 7:45 p.m., the weather service said Sunday. Both twisters traveled about 1.8 miles, damaging trees. One person suffered minor injuries.

According to the DTE outage center, about 121,328 DTE customers were without power as of 2:45 p.m. Sunday.  Though most flooding was cleared overnight, all lanes of southbound M-10 were still blocked Sunday morning, according to the Michigan Department of Transportation. M-10 fully reopened by the afternoon.

The weather service received reports of tornadoes Saturday night in Port Austin, Armada, and Oakland County. The weather service confirmed the tornado in White Lake, but the other two locations are still awaiting confirmation. Garcia said Sunday that the weather service was sending a storm survey team to each site to verify, look at the Damage and determine the intensity.

“The difference between your ordinary thunderstorms and tornadic thunderstorms is going to be the amount of wind shear in the atmosphere,” Garcia said. “So it’s basically if you can get a rotating thunderstorm, which we call a supercell. If you can get any rotation within thunderstorms, that makes conditions more favorable for tornadoes to form.”

according to a news release, akland County, which encompasses the Detroit metro area, received reports of tornadoes, flooding, blocked roads, and Structural Damage to homes and businesses, “We are continuing to monitor the situation to support the safety of all residents in Oakland County,” Oakland County Executive Dave Coulter said in the release. “We urge all residents to report downed wires and stay away from standing water.”

One Twitter user shared a photo of a BP station in Madison Heights with its canopy tipped over. DTE had more than 500 crews in the field and “will be working around the clock to restore power to impacted customers as quickly and safely as possible,” the utility reported on its website.

Most Consumers Energy customers in Michigan who lost power Saturday night had regained it  Sunday morning, said spokesperson Brian Wheeler. But about 7,098 customers were still without power as of Sunday afternoon. Wheeler said most outages are scattered, occurring in Genesee County, Saginaw, Bay City, and Midland.

“The biggest issue in cases like this are wind gusts,” Wheeler said. “Usually, when you get winds that top 50 miles per hour, that’s where you begin to see not just trees that are near power lines, but you could have entire trees or branches falling a great distance.”

Heatwave to cover a vast swath of US, bringing high temperatures to millions. Outside of Detroit, Armada Township declared a state of emergency and faced significant Damage to homes and businesses after being hit by a suspected tornado Saturday night, said Macomb County Executive Mark Hackel in a Sunday afternoon news conference. There are no reported injuries or deaths, he said.

Hackel said that National Weather Service was on the ground, investigating as he spoke, but that he and city officials are considering it to be a tornado based on the patterns of debris and wind. Michigan State Police Lt. Mike Shaw said those from the area shouldn’t come “just to take a look” and that it’s hard for first responders to do what they need to do with visitors trying to get a look at the Damage.

Each speaker at the conference emphasized how important each and every unit was in helping mitigate the tornado’s impact and stressed the value of community. “If responding to emergency situations or disasters were an Olympic sport, this team here behind me would have won gold,” Hackel said.

The biggest challenge facing the village is the lack of electricity –– it’s a small town, and it’s hard to keep the food good, according to John Paterek, Armada Township supervisor. DTE spokesperson Stephanie Beres said it’s hard to know precisely how long it will take crews to restore power but added that it will likely be Monday at the soonest.

“We’ve got more than 100 employees out in the field right now working to assess the damage, working to restore power where we’re able to, and continuing to clean up the mess that was created by the weather pattern last night,” Beres said. “We will continue to work around the clock to get power restored as quickly as they can.

We’re hoping to get the fire station and some of our critical care facilities, i.e., the nursing home just down the street, back up and running as soon as possible.” Detroiters should get a little break from the rain for the next few days, Varcie said, with the forecast predicting highs in the upper 80s and sunny skies through Tuesday.