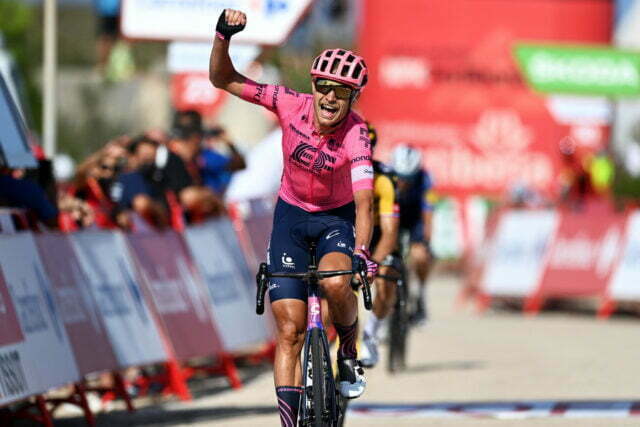 Magnus Cort holds on to win from the break as Primoz Roglic regains Vuelta an Espana lead – GETTY IMAGES. Thursday, August 19 – Requena to Alto de Cullera, 158.3km. Magnus Cort landed the fourth Vuelta, an España stage of his career after the EF Education-Nippo rider held on all the way to the line atop the Alto de Cullera climb, having been part of the day’s five-man breakaway.

Having reached the bottom of the day’s steep final 1.9-kilometer climb in the leading group Cort held off the charging group, containing most of the big pre-race favorites, including Primoz Roglic (Jumbo-Visma).

Stage 5: Philipsen roars to victory as Elissonde takes the lead

Wednesday, August 18 – Tarancón to Albacete, 184.4km. Jasper Philipsen won his second stage of this year’s Vuelta an España as the Alpecin-Fenix rider regained the green jersey from Fabio Jakobsen, who he leads by one point.

Overnight leader Rein Taaramae (Intermarché-Wanty-Gobert Matériaux) lost 2min 20sec after the Estonian was caught up behind a mass pile-up. At the same time, Romain Bardet (DSM), who arrived at the Vuelta in good form, saw his general classification hopes all but end after crawling over the line, battered and bruised, 12min 32sec down.

Tuesday, August 17 – El Burgo de Osma to Molina de Aragón, 163.6km. Fabio Jakobsen took an emotional win just over a year after the Deceuninck-Quick Step sprinter was involved in a life-threatening crash at the Tour of Poland.

Following his crash at the Tour of Poland that resulted in the Dutchman being placed in an induced coma, having broken almost all of the bones in his face and losing all of his teeth, Jakobsen completed his comeback to the top tier of the sport with the win in Molina de Aragón after also taking two stages at the recent Tour de Wallonie.

“This is a dream,” Jakobsen said. “I want to thank my family and the team, my second family because they are the reason I am here. It’s the most beautiful victory of my career, and I can’t thank everybody enough for what they did for me. It’s been a long road since last year, and to be here, a grand tour stage winner again makes me incredibly happy.”

Trailing Arnaud Démare (Groupama-FDJ) with 200 meters to go, the Deceuninck-Quick Step sprinter timed his move to perfection before surging towards the third Vuelta stage of his career, a result that saw the 24-year-old take hold of the green jersey as the new leader in the points classification.

“The finale was hectic, as it always happens when you have a bunch sprint,” he added. “I feel that after this win, my comeback is complete, and the circle is now closed after everything that happened last year. I feel great, I am at a good level, and I’m happy to be here with the team and have the green jersey, which I will try to keep for as long as possible.”

Rein Taaramae (Intermarché-Wanty-Gobert Matériaux) kept the leader’s jersey despite being involved in a late crash. Kenny Elissonde (Trek-Segafredo) trails by 25sec, and defending champion Primoz Roglic (Jumbo-Visma) is 30sec down in third.

Monday, August 16 – Santo Domingo de Silos to Picón Blanco, 202.8km. Almost 10 years after winning his last stand at the race, Rein Taaramae went one better on Monday when the 34-year-old claimed victory in the year’s first mountain finish and took the leader’s jersey off Primoz Roglic – the first of his 14-year career.

After getting into the day’s breakaway, which splintered on Picón Blanco, the steep final slope of the day, the Intermarché-Wanty-Gobert Matériaux rider sat on the wheel of Joe Dombrowski (UAE Team Emirates), allowing the American to do much of the work. At the same time, Kenny Ellison (Trek-Segafredo) struggled to hold on.

Eventually, however, Taaramae made his move and dropped the pair before riding to the biggest win of his career. “It’s a big deal because I’m 34 years old, and I don’t have many years left to try to do this,” he said.

“I have a stage in the Vuelta and Giro [d’Italia], but I’ve dreamt a lot about a leader’s jersey in a grand tour, at least for some days to enjoy and feel how it’s going to be. Today I did it, and I’m very, very happy.”

Sunday, August 15 – Calaruega to Burgos, 166.7km. Jasper Philipsen edged out his rivals in a bunch sprint finish in Burgos to complete a hat-trick of stage wins in all three grand tours for his Alpecin-Fenix squad this year.

“Yesterday, someone put it in our team group chat, and for sure, it was a dream, but I didn’t want to think about it because the chance is always less high than it would be true. It just shows how everyone from the team is really motivated. It was a team effort, and we can be really proud.”

Primoz Roglic finished safely in the bunch in 33rd place but kept hold of his leader’s red jersey after losing no time ahead of Alex Aranburu (Astana-Premier Tech). At the same time, Matthews moved up to third on general classification.

Meanwhile, Adam Yates (Ineos Grenadiers) lost 31sec on his rivals after the Briton was caught up behind a crash in the finale, resulting in him dropping 40 places to 56th on general classification.

Stage 1: Roglic clocks on before roaring back into the red

Saturday, August 14 – Burgos, 7.1km (time trial). Primoz Roglic got his title defense at the Vuelta an España off to the perfect start when he won the opening stage, the 7.1-kilometer time trial through Burgos, on Saturday. Roglic completed the course in 8min 32sec, 6sec faster than Alex Aranburu (Astana–PremierTech), while Jan Tratnik (Bahrain-Victorious) was third another 2sec back.

Roglic, who won the Olympic time trial title in Japan just over two weeks ago, later said that though short, the opening stage through the picturesque city of Burgos was testing. “I am thrilled to have achieved this result today,” the Jumbo-Visma rider said. “Although the time trial was only seven kilometers, it was still very tough.

“We’ll see if I can keep the red jersey for three weeks,” the 31-year-old added. “It’s a great start to this race. Hopefully, we can enjoy this with the team in the coming days.” Adam Yates was the highest-placed Briton, finishing 16th, 20sec behind Roglic. At the same time, his Ineos Grenadiers team-mate Tom Pidcock, making his grand tour debut just two weeks after winning mountain bike gold at the Olympics, was 36sec down in 74th.