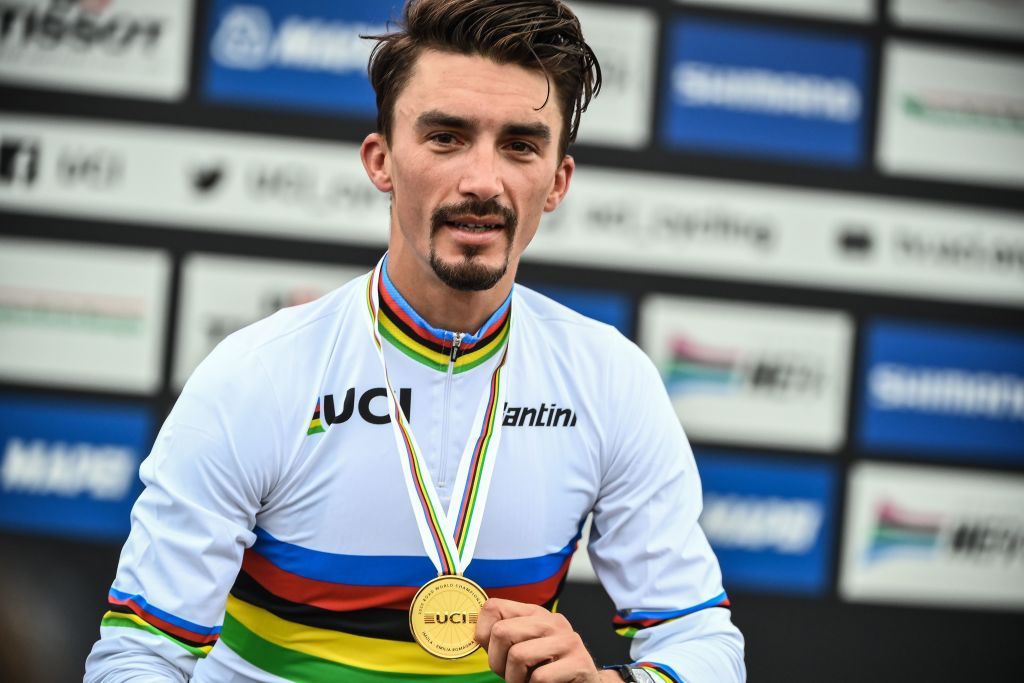 LANDERNEAU, France — The mass return of Tour de France fans coincided with chaos and crashes. At the same time, world champion Julian Alaphilippe avoided most of the carnage to win the opening stage with a punchy attack.

The Frenchman was involved in the first pileup caused by a fan that took down a large part of the peloton, but he remained on his bike. He surged ahead of the leading pack in the final steep climb leading to the finish in Landerneau, crossing the line with an eight-second lead over Michael Matthews. Last year’s runner-up, Primoz Roglic, took third.

With France coming to life again and nearly all coronavirus restrictions lifted, the Tour got underway from the western port city of Brest in a festive atmosphere, returning to its traditional slot in the calendar after last year’s edition was pushed back to September because of the pandemic. Throughout the day, enthusiastic fans took to the streets of picturesque villages, and thousands of them lined the verdant roads of the Brittany countryside. But some were also careless.

The first big spill was caused by a fan who brandished a cardboard sign and leaned into the path of veteran rider Tony Martin, who fell off his bike and took many others down in his slipstream. The Tour cautioned fans to “respect the safety of the riders” and “Don’t risk everything for a photo or to get on television!”

The second pileup involved dozens of competitors – including four-time Tour champion Chris Froome – riding at full speed near the finish. “It was stressful,” former Tour champion Geraint Thomas said. “I was just concentrating on staying on my bike, basically. Happy to get through it.”

The battle for the stage win started just afterward in the Fosse aux Loups, a three-kilometer ascent that includes a 14% gradient. On a ground perfectly suited to his punchy style, Alaphilippe was untouchable. He made his move with two kilometers left to leave behind Roglic and defending champion Tadej Pogacar.

“I can already say that my Tour is a success,” Alaphilippe said. He became the third French world champion to take the yellow jersey on the race’s opening day after Georges Speicher in 1934 and Bernard Hinault in 1981.

Alaphillipe wore the yellow jersey for 14 days two years ago and had it for three more stages last year. He recently became a father and put his thumb in his mouth in celebration as he crossed the finish line.

Thanks to the time bonus, Alaphilippe has a 12-second lead on Matthews in the general classification, with Roglic in third, two seconds further back. Pogacar is in sixth place, 18 seconds behind Alaphilippe.

Thomas finished the stage in 10th place and limited his overall losses to 18 seconds, but two of his top aides, Tao Geoghegan Hart and Richie Porte, were held up by the first crash and were caught up in the second. Porte dropped 2 minutes, 26 seconds, while Geoghegan Hart was 5:43 down.

The first stage was a 198-kilometer (123-mile) trek. A minor crash involving two riders marred the start of the stage before six riders formed the first breakaway. With 100 kilometers remaining, the sextet led the peloton by about two minutes.

Ide Schelling surged away from the leading group and prolonged his effort to build a small gap over his former breakaway companions. The peloton reined in with 68 kilometers left as the Dutch rider rode alone at the front.

Schelling seemed to enjoy the experience, all smiles as he pedaled through the village of Brasparts surrounded by the loud cheers of buoyant fans back en masse to the race after attendance was limited last year due to COVID-19 restrictions.

Schelling was first at the top of the Cote de Saint-Rivoal and raised his fist in celebration. Behind, the peloton’s chase was abruptly stopped when Martin, an experienced teammate of Roglic, fell off his bike after hitting the cardboard sign brandished beside the narrow road.

Martin’s crash caused a massive pileup involving half of the peloton. Once the confusion was cleared up, Jasha Sutterlin of Germany was the first rider to retire, and Martin was bloodied but riding. Deceuninck-Quick Step riders reignited the chase fast to catch an exhausted Schelling about 28 kilometers from the finish. Julian Alaphilippe wins crash-marred Stage 1 of Tour de France originally appeared on NBCSports.com