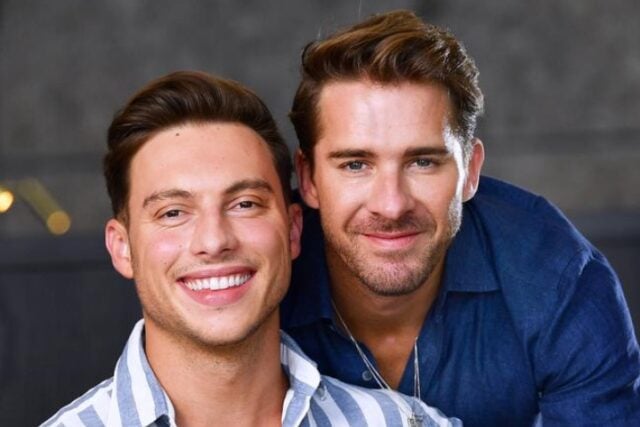 Hugh Sheridan has come out as non-binary in an Instagram post. Eight months after the star announced they’re attracted to both men and women, the Packed to the Rafters actor told followers, “I AM still a human (nonbinary/bi/me/Hughman), but I’m in a monogamous relationship with another human, who I love”.

The actor continued, “I don’t accept a label cause it limits me if you want it; take it. I chose zero labels for no other reason except the exclusion, limitations, separation, I believe are all one, deeeeep down. &… who knows? Why chose?!! Be you. Be true. Be free: to BE, to JUST BE.. you, a human, same as me.”

Non-binary people don’t categorize their gender identity as male or female and tend to go by the pronouns they/them. Sheridan made the announcement on Instagram to promote his front cover of men’s magazine DNA with fiance Kurt Roberts.

The actor explained they were now comfortable being ‘gay’ despite not wanting to be labeled in the interview. Sheridan told the magazine: “Now I’m marrying a guy you can call me gay. Whatever! The point is, we’re all human and, in my case, labeling put me into a box that felt like a cell.”

The 35-year-old proposed to Kurt, the general manager of digital lending at the Commonwealth Bank, on stage during the first night of the Adelaide Fringe Festival back in March. “I went out and bought a ring and flew his family to be seated in the audience on the night. He had no idea. It was a really amazing moment,” Sheridan said. In an interview with Stellar Magazine last year, the star revealed they feel a “responsibility” to speak out to help others who are still “figuring themselves out.” The Adelaide-born star said throughout their school years, their peers assumed they were gay – a label they felt was “misplaced” because they had never been attracted to the same sex at that age.

“After moving to Sydney to attend NIDA, I finally met a guy who I connected with emotionally, mentally and physically,” Sheridan, who had been in love with women before that, explained in the piece. “I was over the moon – I could finally be what people always wanted me to be, so I told everyone.

In return, I was told that if I was anything but straight,t I’d never find wor, and that I needed to hide mynewfoundd love. To add to the confusion, the two mentors who told me this was openly gay themselves; were earnestly trying to protect me and did indeed have my best interests at heart. That was just the reality.”