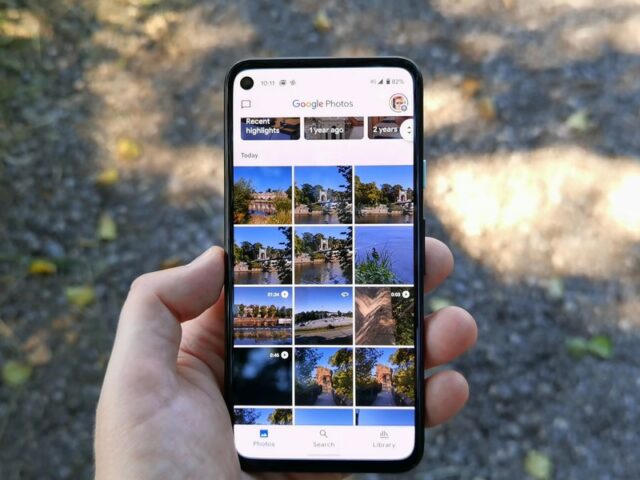 Google announced a series of upgrades to its Google Photos service, used by more than a billion users, at today’s Google I/O developer event, which was virtually streamed this year due to COVID. The company is rolling out Locked Folders, a new photo “Memories” for reminiscing over past events, and a new feature called “Cinematic moments” that will animate a series of static images, among other updates.

Today, Google Photos stores over 4 trillion photos and videos, but most of those are never viewed. To change that, Google has been developing AI-powered features to help its users reflect on meaningful moments from their lives. With Memories, launched in 2019, Google Photos can resurface photos, and videos focused on people, activities, and hobbies, as well as recent highlights from the week prior.

At Google I/O, the company announced it’s adding a new type of Memory, which it’s calling “little patterns.” Using machine learning, little patterns look for a set of three or more photos with similarities, like shape or color, which it then highlights as a pattern for you.

For example, when one of Google’s engineers traveled the world with their favorite orange backpack, Google Photos was able to identify a pattern where that backpack was featured in photos from around the globe. But patterns may also be simple family photos that are often snapped in the same room with identifiable furniture, like the living room couch. On their own, these photos may not seem like much, but when they’re combined over time, they can produce some exciting compilations.

Google will also be adding Best of Month Memories and Trip highlights to your photo grid, which you’ll now be able to remove or rename, as well as Memories featuring events you celebrate, like birthdays or holidays. These events will be identified based on a combination of factors, Google says.

This includes identifying objects in the photos — like a birthday cake or a Hanukkah menorah, for example — and matching up the date of the image with known holidays. Best of Month and Trip highlight Memories will roll out today and will be found in the photo grid itself. Later this year, you’ll begin to see Memories related to the events and moments you celebrate.

Another forthcoming addition is Cinematic Moments, which is somewhat reminiscent of MyHeritage’s “deep nostalgia” technology that went viral earlier this year, as users animated the photos of long-past loved ones. Except in Google’s case, it’s not taking an old photo and bringing it to life; it’s stitching together a series of images to create a sense of action and movement.

Google explains that people often take multiple photos of the exact moment to get one “good” image they can share. This is especially true when trying to capture something in motion — like a small child or a pet who can’t sit still. These new Cinematic moments build on the Cinematic photos feature Google launched in December 2020, which uses machine learning to create vivid, 3D versions of your photos.

Using computational photography and neural networks to stitch together a series of near-identical photos, Google Photos will be able to create vivid, moving images by filling in the gaps between your photos to create new frames. This feature doesn’t have a launch date at this time.

Of course, not all past moments are worthy of revisiting for a variety of reasons. While Google already offered tools to hide specific photos and periods from your Memories, it’s continuing to add new controls and, later this summer, will make it easier to access its existing toolset.

One key area of focus has been working with the transgender community, who have said that revisiting their old photos can be painful. Soon, users will also be able to remove a single image from a Memory, remove their Best of Month Memories, and rename and remove Memories based on the events they celebrate, too.

Another valuable addition to Google Photos is the new Locked Folder, simply a passcode-protected space for private photos. Many users automatically sync their phone’s photos to Google’s cloud but then want to pull up images to show to others through the app on their phone or even their connected TV. That can be difficult if their galleries are filled with intimate photos, of course. This particular feature will launch first on Pixel devices, where users will have the option to save photos and videos directly from their camera to the Locked folder. Other Android devices will get the update later in the year.