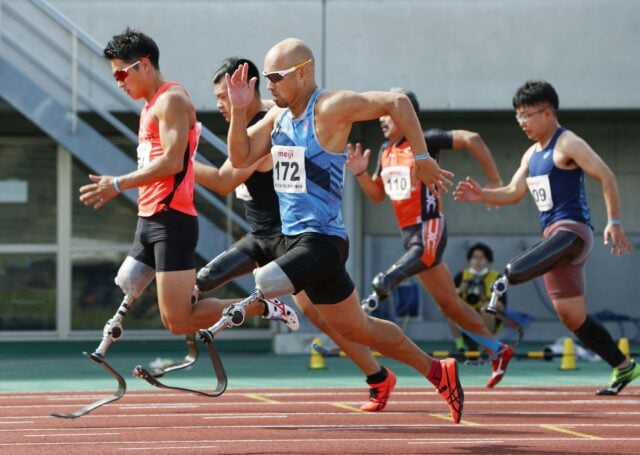 Cyclist Sarah Storey made history Thursday when she became Britain’s most successful Paralympics athlete with her 17th gold and 28th medal of a career that started 29 years ago in the swimming pool at Barcelona in 1992. Here, AFP Sport highlights five of the greatest Paralympians of all time:

By some distance, the most excellent Paralympics medal winner in history, visually impaired American swimmer Zorn won 55 medals, including 41 golds from Arnhem 1980 to Athens 2004. Born in 1964 with aniridia and classified legally blind, she received two artificial iris implants in 2003 that improved her vision to 20/150 though it did not change her event classification.

The pinnacle of her career came in Barcelona 1992 at the age of 28, where she was the most successful athlete of the Games with 10 gold and two silver medals. In 2012, Zorn was inducted into the International Paralympic Committee Hall of Fame, who won golds in every discipline, freestyle, butterfly, breaststroke, and backstroke. At the grand old age of 63, Swiss multisports master Frei defied Father Time to win a silver medal in cycling’s H3 road race in Tokyo on Wednesday and take his all-time medal haul across summer and winter Paralympics to 35.

The silver in the hand-bike event came nine years after Frei’s last medals — a gold in cycling’s H2 time trial and bronze in the H1-4 team relay at the London 2012. But the majority of Frei’s 35 Paralympic medals, including 15 golds, came in the last century.

From 1984 to 2000, he won 22 athletics medals, with 11 golds, in wheelchair distances from 800m to the marathon. He also won eight Winter Paralympics medals in cross-country skiing. He has yet another medal chance in cycling’s H1-H5 mixed team relay later Thursday.

Another athlete to enjoy success at both summer and winter Paralympics, Germany’s Moeller, won 23 medals, including 19 golds in a career that spanned from 1980 in Geilo, Norway, to Torino, Italy, in 2006.Moeller, who lost half her leg in a farm accident at the age of three, dominated the winter Paralympics during that time, with 19 of her medals coming in slalom, giant slalom, super-G, and downhill skiing.

He was signed off in Tokyo from his last Paralympics before retirement with three bronze medals to confirm his status as Brazil’s most decorated Paralympian with 27 awards, including 14 golds.

Born without hands, his proudest moments came at his home Games in Rio de Janeiro five years ago, when he secured four gold, three silver, and two bronze medals. Born in 1988, Dias was inspired to swim after seeing fellow Brazilian Clodoaldo Silva at the Athens 2004 Paralympic Games.

Began as a 14-year-old in the swimming pool in Barcelona in 1992, where Storey, born without a functioning left hand, won two golds. It was the start of a monumental sporting career.

Twenty-nine years, three more swimming golds and 12 cycling golds later, Storey on Thursday overtook swimmer Mike Kenny to become Britain’s greatest Paralympian at the age of 43. Her cycling dominance has been since switching from swimming for Beijing 2008; she completed hat-tricks of victories in all three events she raced in Tokyo.