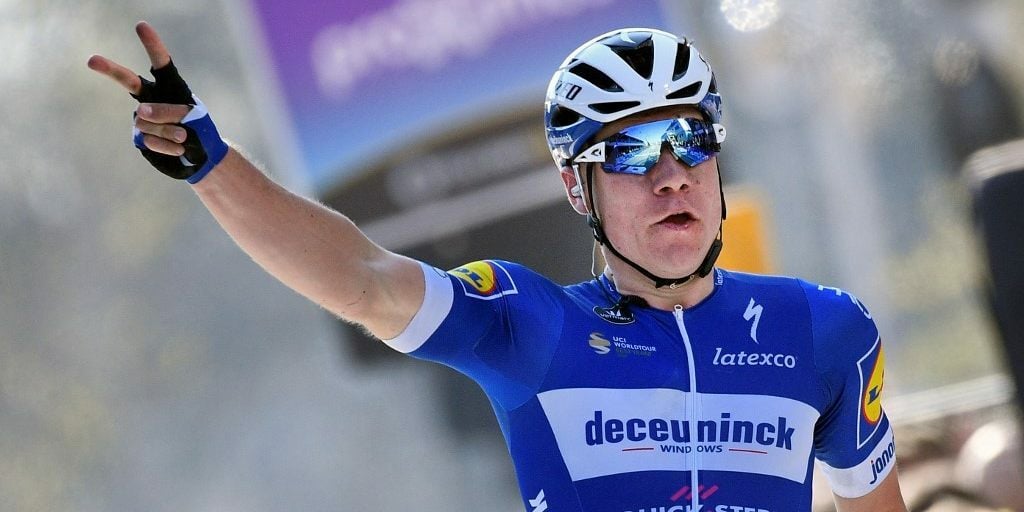 MOLINA DE ARAGON, Spain — About a year ago, Fabio Jakobsen was on a hospital bed fighting for his life in an induced coma after a horrific crash at the Tour of Poland. On Tuesday, he was a stage winner again at a Grand Tour race, taking the lead in the final stretch of the closing sprint to win the fourth stage of the Spanish Vuelta.

“It’s a dream come true,” said the Dutchman from team Deceuninck-Quick Step. “After the crash, it was a long way back. But I’m happy I’m here.” Rein Taaramae held on at the top of the overall standings despite crashing with a couple of kilometers (miles) to go.

It was Jakobsen’s most significant victory since he needed reconstructive facial surgery after being pushed into the roadside barriers by Dylan Groenewegen in the final sprint of the first stage at the Tour of Poland. Groenewegen later received a nine-month suspension by the International Cycling Union.

“It took a lot of time and a lot of effort by a lot of people,” Jakobsen said. “This is also their victory. I’m talking about the doctors, the surgeons, the medical staff in Poland until my second family here, the team, and everybody in between. It’s also my family’s victory because they are the reason why I am here.” Jakobsen passed Arnaud Demare only a few meters (feet) from the finish line at the end of the 163.9-kilometer (101.8-mile) flat stage into Molina de Aragon. “It was a hectic bunch sprint,” he said. “I just had a little bit more in the legs at the end. I’m happy I could pass him. I wasn’t sure I could do it, but I’m glad I did it for my teammates because this is also their victory.”

Taaramae crashed with about two kilometers (1.2 miles) to go as the peloton went around a wide turn. The Estonian appeared to hurt his shoulder but could get up quickly and rejoin the bunch, maintaining a 25-second overall lead over Kenny Elissonde.

“I don’t really know how I crashed. I went down, but I’m alright. I don’t have many injuries. I’m a little bit burned,” Taaramae said. “If there’s no wind tomorrow, I probably can keep the jersey, and the day after tomorrow, it’s a small hill at the finish. I think I have the legs to hang on if I position myself well at the bottom of the climb. I think I can keep it two more stages, and then the Alicante stage will be a big battle, and it will probably be too hard.”

Two-time Vuelta champion Primoz Roglic was third overall, 30 seconds off the lead. Roglic won the first stage but lost the information when Taaramae did a dominant final climb in the race’s first mountain stage on Monday.

Riders will face another flat stage that should favor the sprinters again on Wednesday, a 184.4-kilometer (114.6-miles) route that will finish in Albacete in southeastern Spain. This year’s three-week Grand Tour race will end in Santiago Compostela instead of Madrid. Fabio Jakobsen earned a Vuelta stage win 1 year after the horrific crash originally appeared on NBCSports.com.