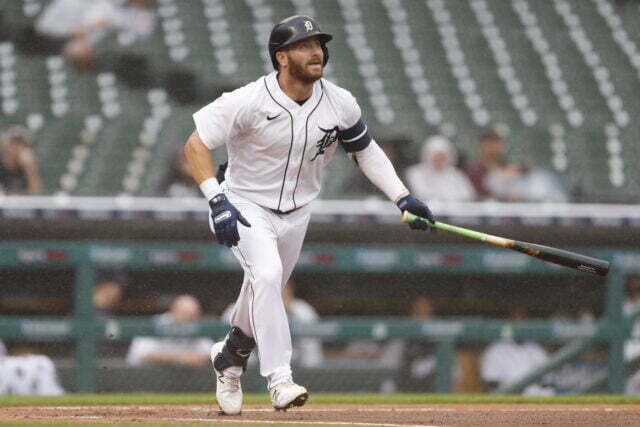 When the baseball skipped underneath a diving Billy Hamilton’s glove in center field, Detroit Tigers slugger Eric Haase put his legs into another gear. Known for driving home runs over the fence, Haase has a secret weapon.

Hamilton chased after the ball, which rolled to the warning track, but Jonathan Schoop and Miguel Cabrera quickly scored. Third base coach Chip Hale aggressively waved his arm. Haase chugged around third base and crossed home plate for a three-run, inside-the-park homer in the fourth inning.

But that moment wasn’t the only reason fans applauded Saturday at Comerica Park. The Tigers (37-46) scored four runs in an electric fifth inning, propelling them to an 11-5 win over the Chicago White Sox in the second of three games in the series.

Entering Saturday, Detroit had lost 18 of its last 20 games against the White Sox. Haase’s inside-the-park home run was the first by a Tiger since JaCoby Jones’ on Aug. 10, 2020, against the White Sox. For their 11 runs, the Tigers recorded 10 hits and eight walks — scoring three runs in the fourth inning, four in the fifth, three in the seventh, and one in the eighth. Haase crushed his second home run in the seventh (this one over the fence in right field). It was his fourth multi-homer game in 2021.

His three-run blast pushed the Tigers’ lead to 10-5. Haase finished 3-for-4 with six RBI. Through 36 games this season, he has 11 home runs. Schoop crushed his team-leading 16th homer (in 79 games played) in the eighth inning. His solo homer traveled 440 feet to straightaway center.  Tigers manager AJ Hinch turned to his bullpen in the sixth inning.

His first reliever, right-hander Joe Jimenez, struck out the side, all on fastballs: Hamilton and Danny Mendick went down swinging, and Zack Collins got punched out looking. For Mendick’s whiff to end the inning, Jimenez’s fastball maxed out at 97.3 mph.

Once Jimenez completed his job, Hinch went to his most reliable relievers. Righty Jose Cisnero pitched a scoreless seventh, thanks to an inning-ending 6-4-3 double play started by shortstop Zack Short. Right-hander Kyle Funkhouser added a scoreless eighth, this time behind a 4-6-3 double play started by second baseman Willi Castro.  Righty Buck Farmer pitched a perfect ninth. Evan Petzold is a sports reporter at the Detroit Free Press. Contact him at epetzold@freepress.com or follow him on Twitter @EvanPetzold.