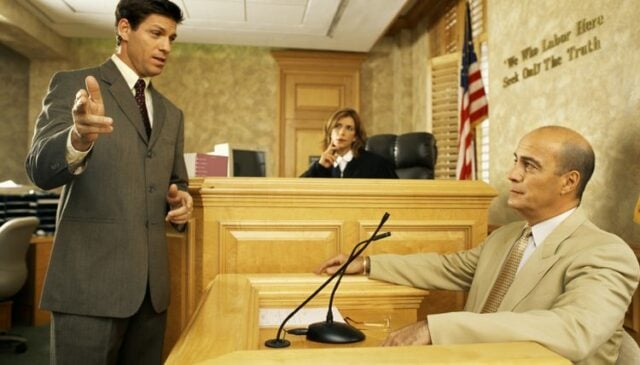 MINNEAPOLIS – Firefighter Genevieve Hansen broke down in tears Tuesday as she testified about being prevented from helping George Floyd as police officer Derek Chauvin knelt on his neck. The 27-year-old, who also trained as an EMT, was on a walk last Memorial Day when she encountered Floyd and Chauvin. She can be heard on video of the arrest begging officers to check Floyd’s pulse.

She described feeling “totally distressed” and “helpless” that the police wouldn’t let her give medical attention to Floyd. Almost everyone who has testified in Chauvin’s trial became choked up on the witness stand as they described watching Floyd go unconscious and lose his pulse. Many expressed regret that they couldn’t help Floyd, a Black man pinned beneath Chauvin’s knee for more than nine minutes on May 25, 2020.

Sometimes survivors of traumatic events hold a “false belief” about their role – for example, that they could’ve saved Floyd from dying, said Nadine Kaslow, a psychiatry and behavioral sciences professor at Emory School of Medicine. Among those who testified were a mixed martial arts fighter, the teenager who recorded a video showing Floyd’s death and her 9-year-old cousin, and the cashier who took a counterfeit $20 bill that Floyd allegedly tried to pass, which led to the 911 call for police. Chauvin, who is white, is charged with second-degree murder, third-degree murder, and second-degree manslaughter.

Simply watching a video of Floyd’s death can take an emotional toll on viewers, especially people of color who have been repeatedly exposed to microaggressions and viral incidents of racism and police brutality, said Kaslow, the Atlanta Trauma Alliance director. She said that witnessing a severely traumatic event – such as Floyd’s death – in person can have “profound” psychological effects, both short and long-term. “It will impact them for the rest of their lives,” Kaslow said. “When people are telling the story, it’s almost like they are reliving a lot of memories.”

‘It’s still weighing on my heart’:George Floyd’s death was traumatizing for Black teens in Minneapolis, who feared the trial would be just as painful.

Wednesday, Judge Peter Cahill had to call a 10-minute recess when Charles McMillian, the prosecution’s 11th witness, began to sob as he watched the video showing Floyd struggling with police and calling out for his mother. “I feel helpless,” McMillian said, struggling to regain his composure in court. “My mom died June 25.”

McMillian can be seen in a video standing in the street behind a patrol car during Floyd’s initial struggle with the police. After McMillian regained composure, prosecutor Erin Eldridge gently asked him whether he could handle hearing and watching more of the video.

Darnella Frazier, the teenager who filmed the infamous video, broke down in tears multiple times Tuesday as she told attorneys that witnessing and recording the incident changed her life. Frazier, who was 17 at the time, said she has stayed up some nights “apologizing and apologizing to George Floyd for not doing more and not physically interacting and not saving his life.”

Donald Williams, a wrestler, trained in mixed martial arts, asked officers to stop the “blood choke,” wiped away tears as he listened to the 911 call he made once officers left the scene. Kaslow said that witnessing Floyd’s death could create emotional anguish, fear, sadness, and other “classic symptoms of post-traumatic stress disorder” such as intrusive memories, flashbacks, or nightmares.

She said witnesses may experience a symptom of PTSD called survivor’s guilt, a feeling that they did something wrong because they survived a trauma while others did not or that they didn’t do enough to help. Christopher Martin, the Cup Foods employee who took the counterfeit $20 bill, told jurors Wednesday that he experienced “disbelief and guilt” after seeing Floyd taken away in an ambulance.

“If I had just not taken the ($20) bill, this could have been avoided,” Martin, 19, said. Martin said he left his job at Cup Foods because he didn’t feel safe. Kaslow said people trying to cope with traumatic events may become isolated and avoid talking about it or visiting places that remind them of the event.

High school student Alyssa Nicole Funari, 18, told the court Tuesday that she hasn’t been to Cup Foods since.  Funari said she felt like she was failing because she wanted to intervene but could not because an officer was pushing the crowd back. “There was nothing I could do as a bystander there,” she said. “I couldn’t do physically what I wanted to do.”

She told the court she initially kept to herself after seeing Floyd arrested, and she “felt numb.” The coping avoidance mechanism is “severely challenged” by being asked to testify and “can become totally emotionally overwhelming,” Kaslow said. Kaslow said trauma can have an “extra profound” impact on children because they don’t have the same cognitive capacity for abstract reasoning, which causes trauma symptoms to manifest physically.

Children may become so overwhelmed that they disassociate or mentally separate themselves from a situation. “Their heart may race, or their breathing becomes labored,” she said. ““They have problems learning. It can affect their self-esteem.”

A 9-year-old girl who wore a shirt with the word “love” on it the day Floyd died testified Tuesday morning. When prosecutor Jerry Blackwell asked the girl how she felt about what she saw, she said she was “sad and kind of mad.” “And tell us, why were you sad and mad?” Blackwell said. “Because it feel like he was stopping his breathing and it was kind of like hurting him,” she said.

The defense did not ask her any questions, and she was excused within five minutes of taking the stand. Kaslow said it’s clear Floyd’s death will continue to affect these witnesses, but the magnitude of the impact will depend on what kind of support they receive and what other traumas they are exposed to. “We need to be mindful as we ask people to testify,” she said. “This is really going to stir a lot of people up.”