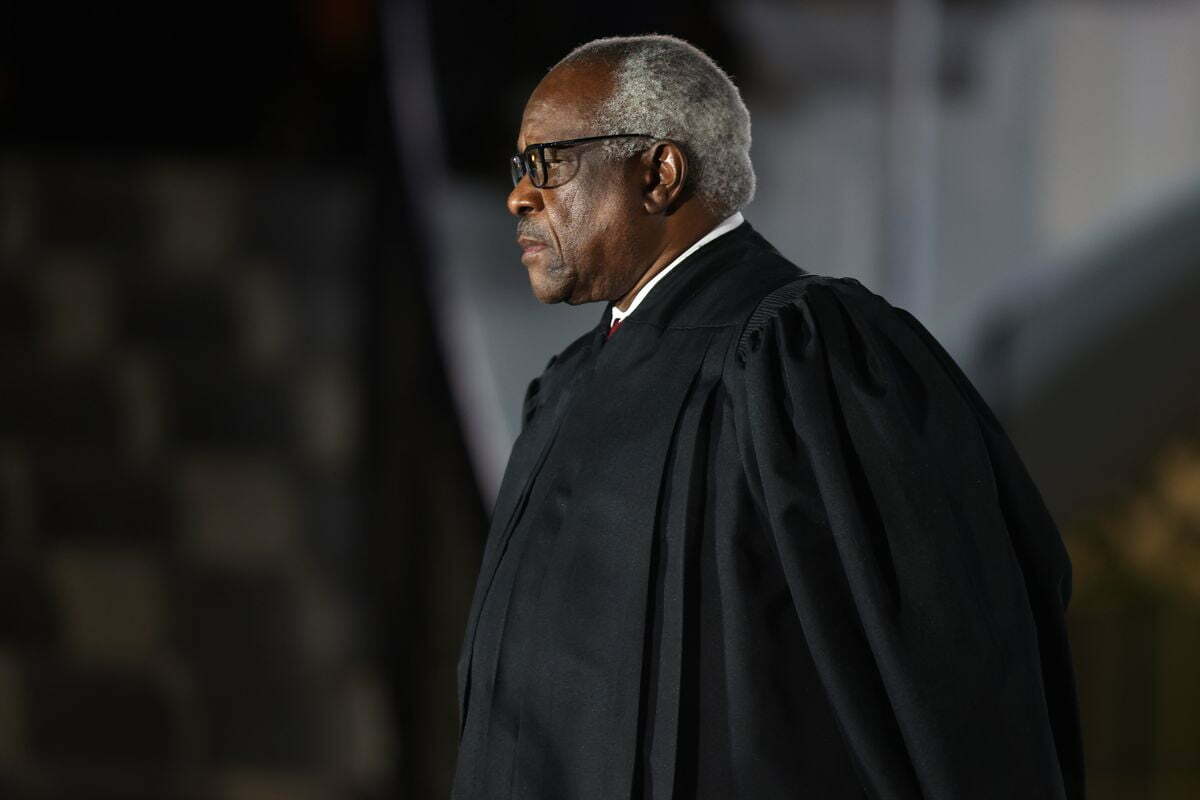 Supreme Court Justice Clarence Thomas flaunted a dangerous ignorance regarding matters digital in an opinion published today. In attempting to explain the legal difficulties of social media platforms, particularly those arising from Twitter’s ban of Trump, he makes an ill-informed, bordering on bizarre, argument as to why such companies may need their First Amendment rights curtailed.

There are several points on which Thomas seems to willfully misconstrue or misunderstand the issues. The first is in his characterization of Trump’s use of Twitter. You may remember that several people sued after being blocked by Trump, alleging that his use of the platform amounted to creating a “public forum” in a legal sense, meaning it was unlawful to exclude anyone from it for political reasons. (The case, as it happens, was rendered moot after its appeal and dismissed by the court except as Thomas’ temporary soapbox.)

“But Mr. Trump, it turned out, had only limited control of the account; Twitter has permanently removed the account from the platform,” writes Thomas. “[I]t seems rather odd to say something is a government forum when a private company has unrestricted authority to do away with it.” 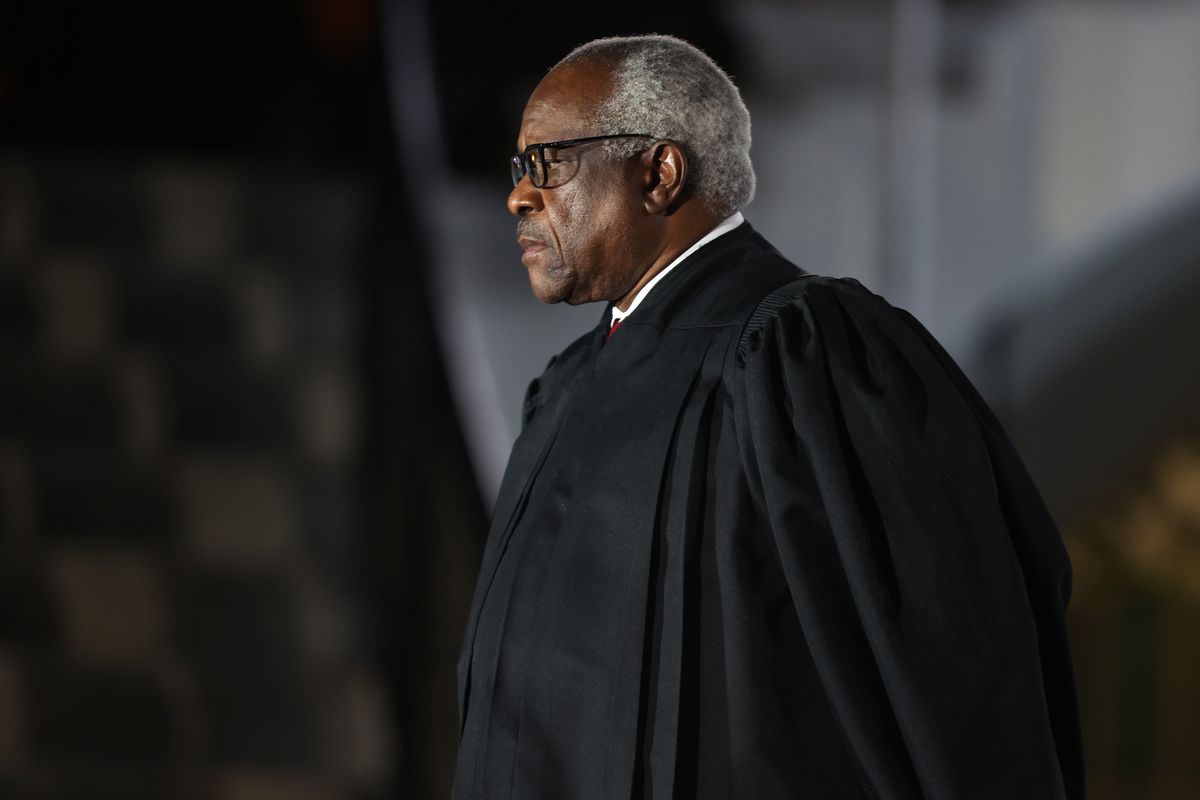 Does it? Does it seem odd? Because a few paragraphs later, he uses the example of a government agency using a conference room in a hotel to hold a public hearing. Indeed, they can’t kick people out for voicing their political opinions because the room is a de facto public forum. But if someone is loud and disruptive, they can ask hotel security to remove that person because the room is de jure a privately-owned space.

Yet the apparent third example, which is clearly most relevant to the situation at hand, is skipped. What if it is the government representatives who are being loud and disruptive, to the point where the hotel must choose whether to remove them?

It says something that this scenario, so remarkably close a metaphor for what actually happened, is not considered. Perhaps it casts the ostensibly “odd” situation and actors in too clear a light, for Thomas’ other arguments suggest he is not for clarity here but for muddying the waters ahead of a partisan knife fight over free speech.

In his best “I’m not saying, I’m just saying” tone, Thomas presents his reasoning why, if the problem is that these platforms have too much power over free speech, then historically there just happens to be some legal options to limit that power.

Thomas argues first, and worst, that platforms like Facebook and Google may amount to “common carriers,” a term that goes back centuries to actual carriers of cargo, but which is now a familiar legal concept that refers to services that act as simple distribution — “bound to serve all customers alike, without discrimination.”

A telephone company is the most common example. It can not choose what connections it makes, nor what conversations happen over those connections — it moves electric signals from one phone to another.

But as he notes at the outset of his commentary, “applying old doctrines to new digital platforms is rarely straightforward.” And Thomas’ method of doing so is spurious. “Though digital instead of physical, they are at bottom communications networks, and they ‘carry’ information from one user to another,” he says, and equates telephone companies laying cable with companies like Google laying “information infrastructure that can be controlled in much the same way.”

Now, this is certainly wrong. So wrong in so many ways that it’s hard to know where to start and when to stop. The idea that companies like Facebook and Google are equivalent to telephone lines is such a reach that it seems almost like a joke. These companies have built entire business empires by adding enormous amounts of storage, processing, analysis, and other services on top of the element of pure communication.

One might as quickly suggest that because computers are just a simple piece of hardware that moves data around, Apple is a common carrier. It’s really not so far a logical leap! There’s no real need to get into the technical and legal reasons why this opinion is wrong, however, because these grounds have been covered so extensively over the years, particularly by the FCC — which the Supreme Court has deferred to as an expert agency on this matter.

If Facebook were a common carrier (or telecommunications service), it would fall under the FCC’s jurisdiction — but it doesn’t because it isn’t, and really, no one thinks it is. This has been supported repeatedly by multiple FCCs and administrations, and the deferral is itself a Supreme Court precedent that has become doctrine.

In fact, and this is really the cherry on top, Associate Justice Kavanaugh, in a genuinely stupefying legal opinion a few years ago, argued so far in the other direction that it became wrong in a totally different way! It was Kavanaugh’s considered opinion that the bar for qualifying as a common carrier was actually so high that even broadband providers don’t qualify for it. (This was all in service of taking down net neutrality, a saga we are in danger of resuming soon). As his erudite colleague Judge Srinivasan explained to him at the time, this approach is embarrassingly wrong.

Looking at these two opinions of two sitting conservative Supreme Court justices, you may find the arguments strangely at odds, yet they are wrong after a typical fashion. Kavanaugh claims that broadband providers, the plainest form of common digital carrier conceivable, are, in fact providing all kinds of sophisticated services over and above their functionality as a pipe (they aren’t). Thomas claims that companies actually providing all types of sophisticated services are nothing more than pipes.

Simply stated, these men have no regard for the facts but have chosen the definition that best suits their political purposes: For Kavanaugh, thwarting a Democrat-led push for strict net neutrality rules; for Thomas, asserting control over social media companies perceived as having an anti-conservative bias. The case Thomas uses for his sounding board on these topics was rightly rendered moot — Trump is no longer president, and the account no longer exists — but he makes it clear that he regrets this enormously.

“As Twitter made clear, the right to cut off speech lies most powerfully in the hands of private digital platforms,” he concludes. “The extent to which that power matters for purposes of the First Amendment and the extent to which that power could lawfully be modified raise interesting and important questions. This petition, unfortunately, affords us no opportunity to confront them.”

Between the common carrier argument and questioning the form of Section 230, Thomas’s hypotheticals break the seals on several legal avenues to restrict First Amendment rights of digital platforms and legitimize those (mainly on one side of the political spectrum) who claim a grievance along these lines. (Slate legal commentator Mark Joseph Stern, who spotted the opinion early, goes further, calling Thomas’s argument a “paranoid Marxist delusion” and providing some other exciting context.)

This is not to say that social media and tech do not deserve scrutiny on any number of fronts — they exist in an alarming global vacuum of regulatory powers, and hardly anyone would suggest they have been entirely responsible for this freedom. But the arguments of Thomas and Kavanaugh stink of cynical partisan sophistry. This endorsement by Thomas accomplishes nothing legally but will provide valuable fuel for the bitter fires of contention — though they hardly needed it.