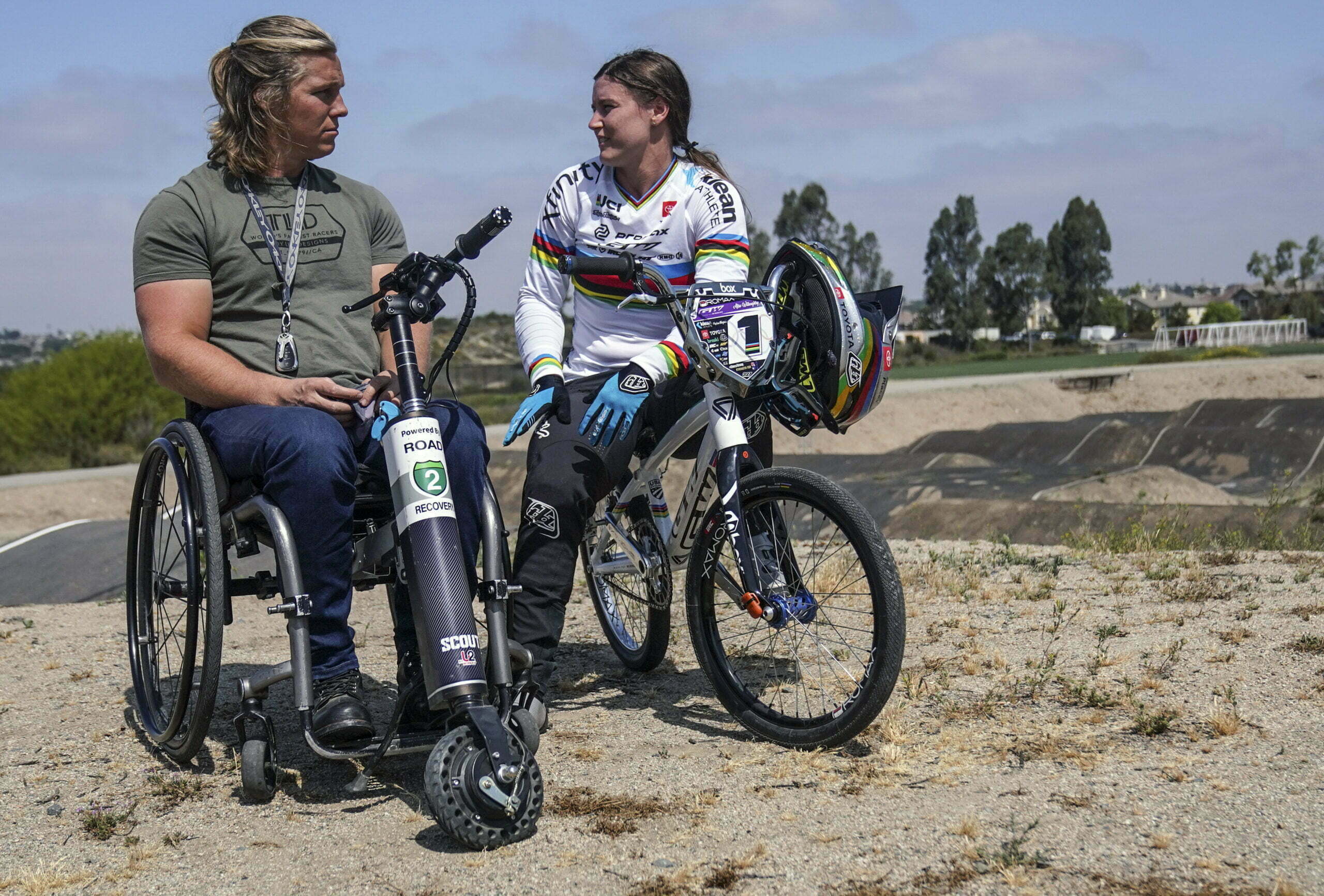 It was “gut-wrenching”, Alise Willoughby said. And knee-scraping, as the gaping hole in her clothes attested. The two-time BMX racing world champion and silver medallist at Rio 2016 knew she had the talent to win gold here, provided her fortunes held on steep-banked bends and bone-rattling bumps that undulate like a sine curve from hell while seven rivals hustle and jostle and often touch, and sometimes crash. But luck betrayed her twice in Friday’s semi-finals, with crashes soon after the start of her first race and, especially cruelly, near the climax of her third.

As she’d dreamt it, Willoughby would barrel furiously down the home straight in the first place, undersized wheels whirring like a jet turbine in a blur of speed and power, proving what she believes in her heart: that she is the world’s best.

Instead, after picking herself up from the ground, head in hands, she got back on her bike and, gingerly and ruefully, pedaled slowly to the finish. Since she is 30, perhaps crossing the line also marked the end of her Olympic career. 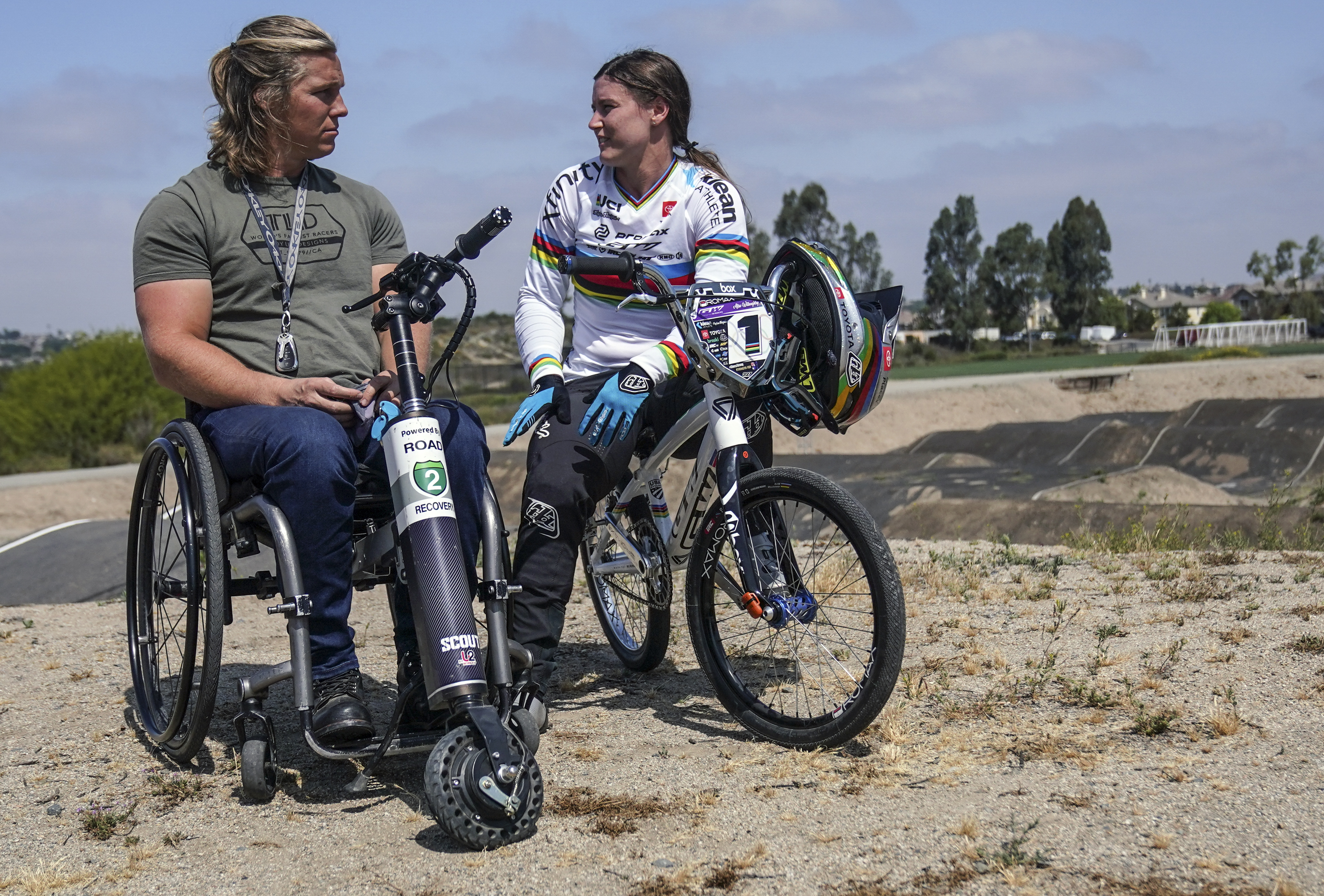 Willoughby collided with Saya Sakakibara of Australia, who came off worse. The distraught 21-year-old was taken off on a stretcher with a suspected concussion before being cleared by medical staff. “I was coming in fast, and we clipped bars a little bit up the lip, and it kind of knocks everybody a bit sideways,” Willoughby said.

She is muscular with turbocharged speed out of the gate but only 5ft 2in. “I’m not the biggest, and a lot of these girls are a lot taller; you kind of slip under there, and sometimes you catch bars a little bit,” she said.

The sport is inherently dangerous: Willoughby’s lengthy injury resume includes a broken fibula and tibia, ankle and knee ligament damage, and hand surgeries. Add in the risk-taking when medals are at stake, and the potential for serious injury at the Olympics is obvious. A Dutch rider even slammed into an official during a training run in Tokyo.

Sakakibara’s brother, Kai, was a contender to make the Australian team, but a cracking crash left him with a traumatic brain injury last year. He was in a coma for two months and in hospital for eight months.

Sae Hatakeyama of Japan crashed and broke her collarbone in the quarter-finals in Tokyo on Thursday. A few minutes before the scheduled start of Willoughby’s third run, Connor Fields, the men’s champion in Rio, appeared to clip another’s wheels and tumbled over his handlebars as two racers landed on top of him and scudded up the slope.

Paramedics rushed to his aid, and after several minutes of treatment, Fields was taken off on a stretcher, placed in an ambulance, and driven to a hospital, where he was reported to be conscious and awaiting a detailed evaluation of his injuries.

The giant video screen displayed a Q by his name as he was carried off the course: he had qualified for the final by two fast early runs despite the crash. But there was no chance that the 28-year-old Texan would be able to defend his title.

The rain had delayed the start of the session as officials worked to soak up puddles with brushes, pat the surface with sponges and wield handheld blowers to dry up water and whoosh it off the track. One used a wheeled line marker to re-paint the white stripes on the edges.

Probably not too hard if you’re on the flat grass at the All England Club; more of a challenge as you try not to slip off vertiginous dips and climbs. Olympic races start with a charge down an 8m high, 35-degree hill, riders completing the 400m course in about 40-45 seconds.

Connor Fields at the start of the men’s semi-final. Photograph: François Nel/Getty Images

Willoughby doubted the weather was a factor in the crashes. “Riding in the rain’s never fun, but the track held up great,” she said. “I don’t think it’s the weather. You’re putting eight of the world’s best head-to-head, and it’s close racing.”

Nicknamed “The Beast”, she grew up in St Cloud, Minnesota, where her father runs a BMX track and trains in the more temperate climes of San Diego. A three-time Olympian, she began riding aged six and started winning professional titles at 15. BMX was introduced to the Olympics in Beijing, but she was below the minimum age of 19 and unable to compete.

Her 29-year-old husband, Sam Willoughby, first saw her when he was a kid in Adelaide watching her races on VHS tapes. A silver medallist for Australia in London in 2012, he became her coach after he broke his neck in a training accident in California in 2016. His bike flipped, and he landed on his head. The injury left him paralyzed and needing a wheelchair.

Racing at this level demands skill, courage, and fatalism. “I don’t think you can ride with any hesitation out there; that’s where things go wrong,” Willoughby said. “You can trip and fall down walking on the street and have something bad happen. It’s a calculated risk.”

Bethany Shriever took the women’s gold for Great Britain. Her compatriot, Kye Whyte, grabbed silver in the men’s race. “It’s BMX, there’s a crash probably every time, and it could be you,” he said. “I told my brother, nothing is stopping me; I’m prepared to crash. This is a contact sport; it’s like being scared in boxing – you will lose,” he added. “I say to myself, ‘I’m ready for war’.”