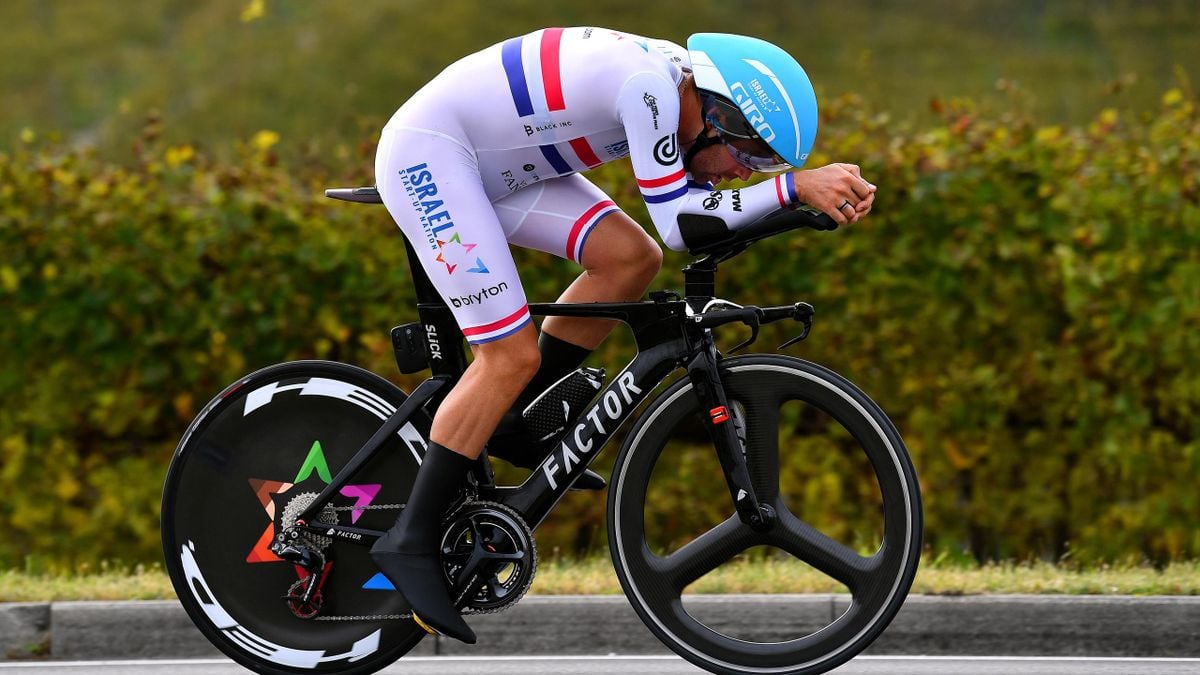 In an ideal world, Alex Dowsett will fulfill a lifelong ambition this summer by representing his country at an Olympic Games. The 32-year-old will win a medal in the time trial in Tokyo, having first helped a Yates twin or a Tao Geoghegan Hart or a Geraint Thomas to victory in the road race. He will then return to Europe and reclaim the Hour Record, a discipline in which he says he has “unfinished business”.

Of course, Dowsett has been around cycling long enough to know the ‘ideal world’ rarely exists. Injuries, illness, loss of form – there is any number of potential obstacles to overcome. Dowsett’s planned crack at the Hour Record just before Christmas had to be aborted at the last minute after he contracted coronavirus (“Given the air pressure on the day I was due to do it, that was a real kick in the teeth,” he says).

The truth is, just being selected for Team GB would be a severe accomplishment, given there are only four spots available on the road. Dowsett’s is just one name on a shortlist that includes the Adam above and Simon Yates, Geoghegan Hart, Hugh Carthy, Geraint Thomas, James Knox, Luke Rowe, and Tom Pidcock. Hiss Israel Start-up Nation team-mate and a seven-time grand tour winner, Chris Froome is not even on coach Matt Brammeier’s shortlist, although Dowsett insists it is “not beyond” the double Olympic bronze medallist to find some form and make a late bid for glory.

Either way, Dowsett is philosophical. The Essex rider begins the Giro d’Italia in Turin on Saturday, confident that he has done absolutely everything in his power to be on the start line in Musashinonomori Park on July 24.

“I’ve worked harder than I’ve ever worked,” Dowsett says from his hotel room in Turin, which he is sharing with Alessandro De Marchi. “I mean, I always feel like I’ve worked as hard as I’ve ever worked, but I have just stepped it up again this year. My weight’s down, my power’s up. I could not have done any more. So I think, whatever happens, I’ll be at peace with it.”

Dowsett will spend the next three weeks in Italy burying himself in the service of Dan Martin. He says he might try to infiltrate the odd break. Dowsett famously won stage eight of last year’s Giro in a solo breakaway, seven years after his only other grand tour stage victory, which also happened to be on stage eight of the Giro (a time trial in 2013).

But he concedes his chances of winning again this year are probably not as good. Saturday’s opening individual time trial is a short 8.6-kilometer blast around Turin (see below stage profile), but it does not look like one for him. And besides, the Team’s’ focus this year is more on Martin and the general classification.

“I checked out stage eight, and there’s a 20km climb at five percent, so I’m not sure stage eight is going to happen for me this year, no matter how much I want it,” he says, laughing. “But there will be opportunities, and we have a lot of cards to play. Me being one of them. We’ve got a great team. A slightly different focus to last year when we were very much a sprinter’s Team and going for breakaways. This time we’ve more got aspirations for the overall and the harder mountain stages, which will be fun.”

Dowsett’s primary goal for the year, though, remains Tokyo. He is desperate to make the cut, having missed out in London and Rio. “The Olympics is a huge deal,” he admits. “For a British sportsma,n it’s the pinnacle. I remember as a kid watching Jason Queally in Sydney. But no one gets a free ticket just because you’re ‘good enough’. You have to show you can perform at that level.”

Dowsett is confident that he can. “I think I’ve shown in the past with my worlds result in Harrogate [he finished fifth in the time trial world championships in 2019], and last year, when we got things quite wrong during Covid, and I was still top 10… with optimal equipment, I believe I can be around there. I’m in the ballpark of an outside medal contender.”Ass Dowsett is only too aware; the tricky thing is that the two riders who compete in the time trial in Tokyo have to come from Britain’s four-man road squad. And with a mountainous road race, the selectors will have to think very hard about their priorities. Dowsett feels the rules are perverse.

“I don’t understand why it’s a thing in cycling, where we already have so few events. It’s like saying to Usain Bolt: ‘If you want to do the 100m and the 200m, that’s fin,e but you’ve got to do the 1,500m as well, mate!’ “But all I can do is to show I’ve improved my climbing and to show I can do the numbers in the TT [time trial] as well.

“It’s going to be a battle, that’s for sure. I wouldn’t like to be on the selection committee. When you’ve got Geraint, the Yates brothers, Hugh Carthy, Tao, Froomey… how do you leave any of them at home?” Even Froome? “Don’t count him out,” Dowsett warns. “It was a hell of an injury, and even to have got to where he is now is impressive.

I’m pretty sure he doesn’t need to do it. He’s doing it because, like [Mark] Cavendish, he wants to. Because he believes he can still win the Tour de France. Ultimately there’s a bunch of people who shoot him down online, but as long as he thinks it and the Team believe it, that’s the most important thing.”

Ideally, says Dowsett, he goes to Tokyo in July and then uses that form to “drop straight into the Hour Record”, the discipline in which he was briefly the world record holder in 2015. “I want to get it done,” he says. “There were some backers behind my attempt at Christmas, for which I was hugely grateful, and I want to repay their faith.

Plus, there was a much bigger picture behind the Hour Record being that we’re doing it for the Haemophilia Society [Dowsett is a hemophiliac], for [his charity] Little Bleeders, to sort of sending a message out that was far bigger than the record. So I think that’s very much still an important thing to do. And it’s something that I feel that it’s unfinished business for me as well.”

In the meantime, Dowsett plans to get his head down and get working for Martin. Does he feel the 34-year-old has what it takes to claim a first grand tour, having finished fourth at last autumn’s Vueltaana España? “Definitely,” he says.

“Each rider has his own strength,s and Dan’s one where if you stick him on a long enough climb, and he’s there at the end, there’s not any faster at the finish. I think some of the Parcours [route] could really suit him. I think we can come out of this with stage wins and/or a perfect GC [general classification] result.”

As for Dowsett, he will keep plugging away, trying to prove to the Team GB selectors that he is worth a spot. “Whatever happens, I won’t look back and thin,k ‘I wish I’d done this’,” he says. “If I miss out, I’ll look back and go ‘I just wasn’t good enough.’ I don’t really know whether that makes it any better. But I’ll be at peace with whatever happens as I’ll know I couldn’t have done any more.”