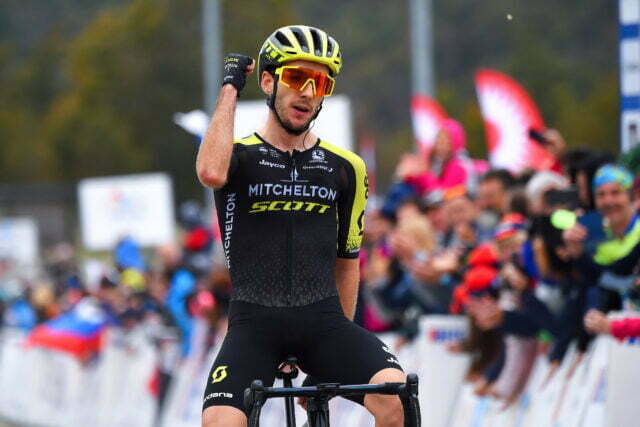 Britain’s Adam Yates claimed his first victory for new team Ineos Grenadiers on day three of the Volta a Catalunya, taking the race’s lead in the process. The 28 year-old, who has joined Ineos Grenadiers from Mitchelton-Scott this year, won the climb up to the ski station of Vallter 2000 in convincing fashion, counter-attacking over the top of a group which included Alejandro Valverde (Movistar) with Sepp Kuss (Jumbo-Visma).

Yates, who profited from vital work from his Ineos Grenadiers team-mates, ended up winning the stage by 13 seconds from former team-mate Esteban Chaves, who attacked out of the peloton and nearly bridged across to the Briton. On Tuesday, Rohan Dennis took his first win of the season when the Ineos Grenadiers rider blasted his way around the lumpy 18.5-kilometer time trial course in Banyoles to secure stage two at the Volta a Catalunya. “It’s really great to be back on the top step,” Dennis said after securing his first win since taking the world time trial title in Harrogate in 2019 with a time of 22min 27sec, clocking an average speed of 49.443km/h.

Adam Yates moved up to fifth on general classification after finishing the time trial in seventh place on a good day for British team Ineos Grenadiers, who had four riders in the top 10. Riding in only his second race for Ineos Grenadiers following the close-season transfer from Mitchelton-Scott, Yates is their highest placed rider on general classification. At the same time, team-mate Richie Porte is seventh. Geraint Thomas, meanwhile, moved up 22 places to eighth, at 19sec.

Cavendish takes a 2sec lead into Wednesday’s 163km second stage from Riccione to Sogliano al Rubicone thanks, primarily, to the time bonus he earned for his second runners-up spot of the season. In a statement from his Deceuninck-Quick Step team, Cavendish said: “Two podiums in a day and the leader’s jersey here, it’s not too bad. Though we just missed the wins, I am incredibly proud of our five-man group here.

“The lads looked after me in the morning, and I was disappointed not to repay their hard work with a victory. But then, in the afternoon, we committed against the odds in the team time trial. I couldn’t be happier to at least get to lead the race after day one, especially as it’s the first time in four years that I led a stage race. Now some hilly stages await and, we’re motivated to work hard for our GC [general classification] guys.”

Stage one: Froome drops like a stone as Kron takes victory

On Monday, Chris Froome endured a chastening day when the four-time Tour de France winner was dropped on the final climb of the first stage at the Volta a Catalunya, before rolling over the finishing line 8min 30sec behind the winner and 8min 14sec adrift of the leading contenders.

Competing in his second race for Israel Start-up Nation following his move from Ineos Grenadiers, Froome, 35, told reporters he had just returned from an altitude camp and was not expecting to be challenging in Spain, but was “hoping to see some progression”.

During last month’s UAE Tour, Froome labored before finishing 22 minutes behind Tadej Pogacar, leaving many questioning his ability to win a record-equalling fifth Tour. Following a career-threatening crash at the 2019 Critérium du Dauphiné, Froome has struggled to regain the form that made him the most successful grand tour rider of his generation.

The latest setback for Froome came as Spanish team Movistar put riders on the front of the peloton on the category one Port de Santa Fe del Montseny climb. As the pace increased, the number of fastmen, including Peter Sagan (Bora-Hansgrohe), was dropped, as was Froome, who lost contact shortly beyond the summit of the relatively benign-looking climb.

Andreas Kron, meanwhile, took the biggest prize of his career when he outmuscled Spanish champion Luis León Sánchez to win a sprint finish from a four-man break at the end of a hilly stage in the week-long race.

Kron, a first-year neo-pro with Lotto-Soudal, had won just one race at the Tour de Luxembourg. However, the 22-year-old announced himself by beating Sánchez (Astana-Premier Tech), 37, while Rémy Rochas (Cofidis) was third, Lennard Kämna (Bora-Hansgrohe) fourth.

Geraint Thomas, who is riding as part of a strong-looking seven-man Ineos Grenadiers team, featuring Richard Carapaz, Richie Porte, Adam Yates, Rohan Dennis, Jonathan Castroviejo, and Luke Rowe, finished safely in the bunch and goes into Tuesday’s time trial on the same time as the bulk of the general classification contenders, 26sec adrift of Kron.