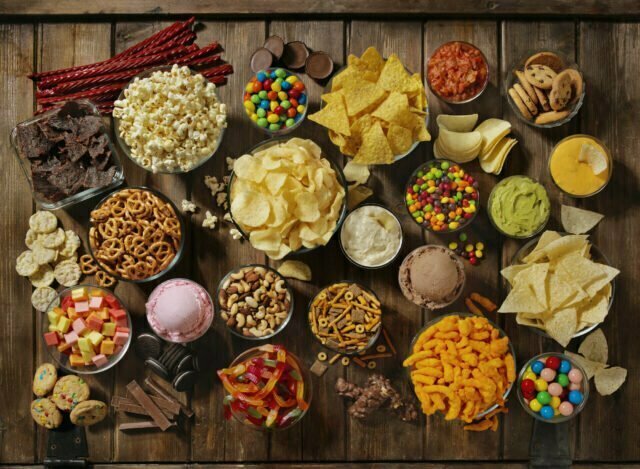 When you live with other people, you might notice how you tend to put your stash of food in its own corner. That way, it doesn’t mistakenly get eaten by a roommate or family member. But for some people, that’s just not enough, with many admitting they stash their snacks in unbelievably hidden places. According to a new survey conducted by OnePoll on Stuffed Puffs that involved 2,000 American snackers, 48% of respondents report that they have hidden their favorite treats around the house—primarily for one of two key reasons.

What makes someone want to hide their snacks?

Forty-six percent of those who hide their snacks admit they do so because they don’t want to share them with anyone else in their household. Another 53% say the people they live with “eat them all” if they knew where to look, which drives them to stow their goodies in hidden, unexpected places throughout their homes.

RELATED: One Major Side Effect of Late-Night Snacking, Says a New Study In addition, of respondents who admitted to hiding snacks in the past, 69% said they’re currently doing so! Some 72% also revealed that their snack stash had been discovered by one of the people in their household, leading them to move their store to a different location an average of four times.

Where are people hiding their snacks?

One of the most shocking takeaways from this survey, in our opinion, is the place(s) people choose to store their “stockpile.” Respondents have admitted to keeping their snacks behind the washing machine, inside oatmeal containers, and even behind books on the bookshelf.

However, even though these spots seem out of the ordinary and creative enough to not be discovered, as it turns out, only 6% of respondents have never been caught snacking. And finally, the average respondent believes they could survive almost five full months living off their stockpile of snacks and treats alone. Do the results from this survey resonate with you? If so, consider checking out 12 Best Snacks That Crush Hunger Cravings.