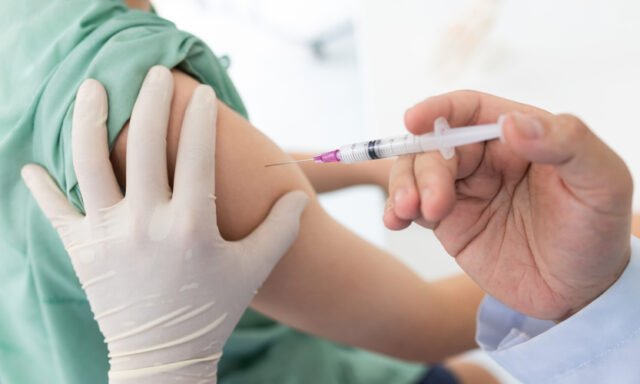 The Food and Drug Administration on Monday granted emergency use authorization to the Pfizer-BioNTech vaccine for use in teens ages 12 to 15, which became the first inoculation to receive that kind of clearance in the U.S. The decision is welcome news to school districts struggling with online and hybrid learning plans built around keeping kids healthy in a pandemic. Teens 16 years and older already qualify for some vaccines as schools scramble to ensure seniors qualify for graduation.

The decision means adolescents ages 12 to 15 could qualify for shots as soon as Thursday, after the Wednesday meeting of an advisory committee to the Centers for Disease Control and Prevention. President Joe Biden said last week that 20,000 pharmacy locations are ready to begin vaccinating adolescents once the necessary approvals come through.

Shots also will be available soon through pediatricians’ offices, the president said. “And if teens are on the move this summer, they can get their first shot in one place and a second shot elsewhere.” That may be more complicated in reality. FDA officials speaking late Monday said that while their authorization covers the entire country, each state may have its own rules about administering vaccines, so not all pharmacies or vaccination sites available to adults will be open to adolescents.

Since it was authorized in December, older teens, ages 16 and 17, have been allowed to get the Pfizer-BioNTech vaccine. The other two vaccines licensed for use in the USA, from Moderna and Johnson & Johnson, have not been available to minors because studies are still underway.

Article Summary show
Also in the news:
Schools scramble to get high school seniors on pace to graduate.
Alabama taking the early exit on federal pandemic unemployment programs
What level of antibodies protects against COVID? It’s not yet known
Education Department to fund college retainment
Biden, 6 governors to chat about regaining vaccination momentum
Novavax plans to present U.S. data on its vaccine soon.

►The World Health Organization designated the B.1.617 variant first discovered in India as a “variant of concern.” India has been experiencing a deepening pandemic crisis as the variant runs rampant through the country, which has since been found in 32 countries, including the United States.

►The president of El Salvador says he will donate coronavirus vaccines to seven towns in Honduras even though his own country’s vaccination effort is still struggling.

📈 Today’s numbers: The U.S. has more than 32.74 million confirmed coronavirus cases and 582,100 deaths, according to Johns Hopkins University data. The global totals: Over 158.6 million cases and 3.29 million deaths. According to the CDC, more than 329.8 million vaccine doses have been distributed in the U.S., and more than 261.5 million have been administered. More than 115.5 million Americans have been fully vaccinated – 34.8% of the population.

📘 What we’re reading: A year full of social distancing, mask-wearing, hand washing, and staying at home to prevent coronavirus spread rendered the 2020-2021 influenza season practically nonexistent. Read more here.  Keep refreshing this page for the latest updates. Want more? Sign up for our Coronavirus Watch newsletter for updates to your inbox and join our Facebook group.

Schools scramble to get high school seniors on pace to graduate.

There isn’t data available yet on how the pandemic has affected the nation’s overall dropout rate. Many school officials say it’s too early to know how many students who stopped logging on for distance learning don’t plan to return. But soaring numbers of students who are failing classes or are chronically absent have experts fearing the worst, and schools have been busy tracking down wayward seniors through social media, knocking on their doors, assigning staff to help them make up for lost time and, in some cases, even relaxing graduation requirements.

According to the National Center for Education Statistics, the pandemic’s effects could erase gains the U.S. made in reducing its dropout rate, which fell from 9.3% in 2007 to 5.1% in 2019. “If we lose a student, it is going to be after kicking and screaming and fighting tooth and nail for them,” said Troy Pitsch, who supervises high school principals in Kansas City, Kansas.

Gov. Kay Ivey says she will end Alabama’s participation in federal unemployment programs geared to the pandemic on June 19. The decision means the state will drop the additional $300 weekly payment in unemployment benefits. The governor follows other Republicans, such as South Carolina’s Henry McMaster, who have announced early withdrawal from the federal programs, claiming they discourage some people from looking for employment and thus create a labor shortage. “There are no industry shutdowns, and daycares are operating with no restrictions,” Ivey said in a statement. “Vaccinations are available for all adults. Alabama is giving the federal government our 30-day notice that it’s time to get back to work.” – Brian Lyman, Montgomery Advertiser.

What level of antibodies protects against COVID? It’s not yet known

Fifteen months after the pandemic shut down most of the world, researchers are still trying to determine how much of a specific type of antibodies a person needs to avoid serious illness, hospitalization, or death. It’s something scientists worldwide would find extremely useful as more vaccines and possible boosters are created.

The information would help to quickly show if a vaccine was compelling enough, without the need for large-scale, lengthy trials. “All you’d have to do is vaccinate people with a new vaccine, measure their antibodies, and you’re done,” says biostatistician Dr. Peter Gilbert. “And you could do it with maybe 400 people instead of 40,000.” – Elizabeth Weise.

The Education Department will release $36 billion to colleges nationally to help universities and students struggling during the pandemic. The funds are a part of the American Rescue Plan, and half of the funding is direct to students.

In addition to the direct grants, the department said colleges can use the money to retain students or help re-enroll those who dropped out due to the pandemic. Colleges could also use the funds to help vaccinate students or prevent the spread of coronavirus on campus.

Public and private nonprofit universities can use some funding to offset costs related to the pandemic, such as lost revenue, expenses tied to providing online education, or faculty and staff training. For-profit colleges must direct all the money they receive to students directly.

International students and DACA recipients had been excluded from previous emergency funding under former President Donald Trump. On Monday evening, Education Secretary Miguel Cardona said the relief funding would now include all students in a call with reporters.

President Joe Biden will talk with three Democratic and three Republican governors Tuesday about innovative ways to get more people vaccinated. Biden will meet virtually with the leaders of Ohio, Utah, Massachusetts, Maine, Minnesota, and New Mexico to share best practices as the administration moves toward getting 70% of adults at least partially vaccinated by July 4.  More than half of all Massachusetts, Maine, and New Mexico residents have earned at least one shot, ranking among the top 10 states. Ohio and Utah are in the bottom half of the states for vaccination rates. – Maureen Groppe

Novavax plans to present U.S. data on its vaccine soon.

Novavax, the Maryland-based biotech firm whose vaccine has performed well in clinical trials in the U.K. and South Africa, expects to release data about its U.S. study “in a few weeks” but won’t be ready to seek regulatory approval until sometime in the second half of the year. CEO Stanley Erck told USA TODAY that Novavax has been addressing production issues that have prevented the company from manufacturing the vaccine to scale. It remains “on track” to file a request for emergency use authorization with the FDA.

In a quarterly report released Monday, Novavax said it intends to seek that clearance and the OK from European regulatory agencies by the third quarter. The company also revised its anticipated capacity to 100 million doses per month by the end of September. Novavax has a production and manufacturing deal with the Serum Institute of India, and its vaccine is widely anticipated in developing countries.